The Rain in Spain falls mainly on Scooby!


Tuesday 26 March 2013
The heavens have opened here at Scooby – it is very wet, the dogs are inside and we´re all feeling a bit frustrated as we´re eager to roll our sleeves up and work but there is only so much we can do outside during this ongoing downpour. However, don´t be fooled that the weather can restrict the value that a volunteer can add; there are many other jobs that are equally important.

We´ve prepared the food, which as anyone who has already volunteered at Scooby knows, can be a long and tedious process as the donated food is often in very small packets which need to be opened individually. With 500 mouths to feed you can imagine how many packets need to be opened! With each tear of every packet you have to think about the dogs and the seemingly thankless task becomes a labour of love, okay okay, that´s probably going a bit too far but it really is an important job! 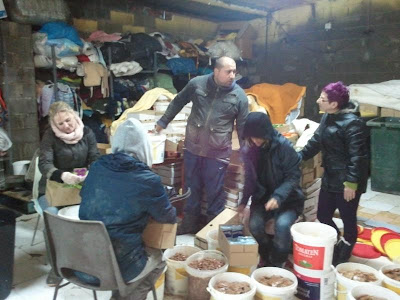 We´ve spent time with the dogs who are recovering from their illnesses or operations in the clinic. Cleaning their crates, feeding them and giving them some tender loving care are vital to getting them back on their feet.
We´ve cleaned the inside kennels with as little disturbance as possible to the dogs who are seeking shelter from the rain. This can sometimes take a while as we´re easily distracted by wet dogs who look like they need a cuddle! It makes a real difference to them in this weather to have cosy beds, especially the recently rescued Galgos who are a little underweight, so we put blankets down and leave knowing that they can rest in comfort.
Now, we´re sitting at our laptops and iPads drinking tea writing descriptions of the dogs for the website and stories for the newsletter; another important job as this is what helps to attract volunteers, secure donations and find homes for the animals.
Our spirits are lifted when Pablo enters the office with a Monk who is interested in adopting Pedro, a lovely little brown dog; they meet and it´s made official. ´Do you think he could bless Freddy? ´ I ask Sabine in jest. Freddy is an adorable young puppy found abandoned in Salamanca who I´ve been looking after since I arrived on Friday. She jumped up and ran over to ask; the Monk obliged and we are all moved to watch Freddy being blessed in front of us. 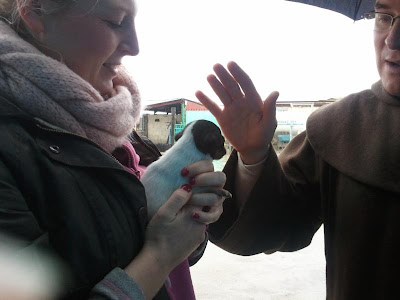 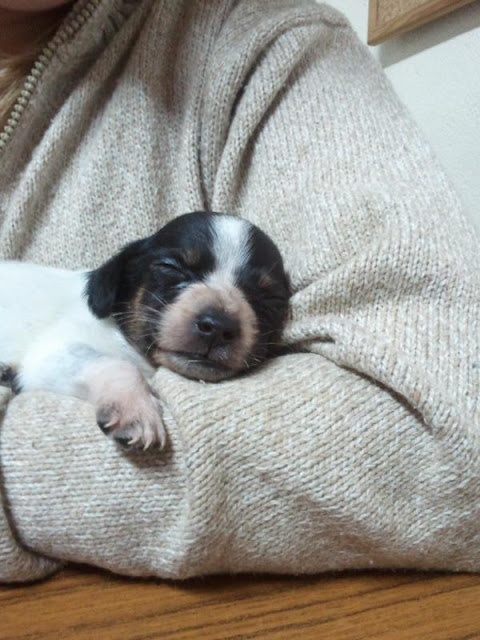 With smiles on our faces we head back to the office when we notice a young lady waiting at the gates; she´s also interested in adopting a Scooby dog and after a few introductions she goes home with a beautiful young black Labrador named Baloula. 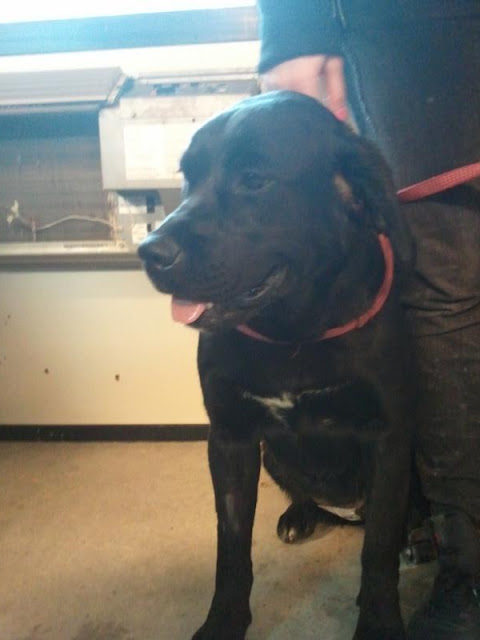 And now a family arrives at the office with Pablo who spends some time with them looking through the database; could this be the third adoption of the day? There are lots of smiles and things look positive. It turns out that Dumbo is the one for them and there we have it; three adoptions on one of the most miserable days of the year so far :)
No two days are the same at Scooby and no amount of rain can dampen our spirits or the lessen the hope that we have for its animals.
Posted by Sociedad Protectora de Animales Scooby at 2:36 PM


My name is Pinocchio. A year ago I came to Scooby Zamora. I cannot remember what happened to me, only that I was very sick. My hair was patchy and I had bald spots all over my back. I looked very ugly, despite all the care and pampering I was getting from my caretakers and all their sweet words, telling me how handsome and beautiful I was (they were not looking my outside, but my inside). And, really even in those times I did not realize, I'm beautiful!,  that was not comfort enough...
At the beginning, I felt as if the other dogs looked at me askance and I thought they were laughing at me, which was making me so sad, I just wanted to be alone in my little corner.  All they wanted really was to approach me and make me feel that here, in Scooby, I would always be surrounded by good friends and nobody would hurt me.
Little by little I have begun to regain confidence, my hair has grown strong and lush and I confess I like eating a lot... My eyes are always bigger than my stomach! And it seems like I've become the sheep of Scooby Zamora, I mean I'm the BEAUTIFUL AND CHARMING SCOOBY'S SHEEP!!
Do you want to adopt me? 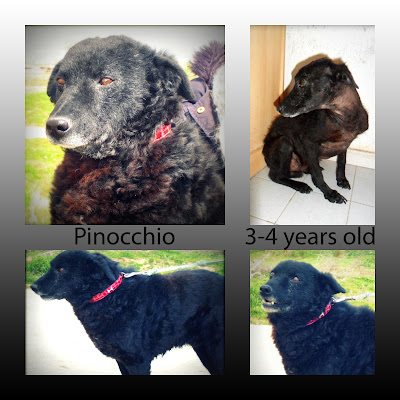 As you know, and if you don’t I am telling you now, the collection of abandoned animals in this country is the direct responsibility of the city councils and if the city is very small, it is normally the provincial council  that is responsible for collecting them, either because they have their own dogpound like Valladolid city or because they have a contract with a refuge or a company to do it for them. At Scooby it has always been clear that in those cases in our surrounding area where the collection is being arranged by a company, we will always try to get the contract. And this time it was the city council of Salamanca and we won the contract so during the next year we will be responsible of the collection, which will mean more work, more dogs to find a home for, more support needed from people from both here and abroad, and have dogs adopted from here. I know that for some of you it is more reassuring to adopt from the pound but our dogs also have a right to a home, so please don’t let me down and let me come to the conclusion it might be better that the pound collects the dogs, because it seems that when their end date comes near, all of a sudden more possible adopters are found and I don’t think that is fair. Anyway, so many words to tell you that we have the contract for the city of Salamanca.
Loving kisses, purrs and licks from the animals, Fermin
Posted by Sociedad Protectora de Animales Scooby at 12:22 AM

The sad story of Jessy


Everything started in the perrera, where Jessy came when she was still a baby. There she had to wait until somebody noticed her, she was easily adopted because she was a small and lovely puppy.
Her new owner took her to his house and we don’t know how he treated her but judging from the way she behaves, Jessy has been abused. When she hears a hard sound, she starts to tremble, when she does something wrong and you tell her “NO” she looks at you with frightened eyes, bowing her head and putting her tail between her legs as if she is waiting to be beaten,  so when you see her like that you want to ask for forgiveness and pet her to let her know nothing is wrong.  When you call her, she comes with her backside low to the ground, peeing, when she sees you with something in your hand that she doesn’t know, she trembles. This and many things more made us aware that Jessy’s life hasn’t been so good, but even so she stayed loyal to her boss, so loyal that when her boss died she loved him so much that she stayed stretched out to his dead body, waiting for somebody to find them. It took 3 days for them to be found, 3 days in which she never left his side; she was always next to him, her little body next to his during these days seemingly without an end, waiting for someone to find them. And when they finally did, she did not understand why they took her boss away and left her alone, helplessly, which made her feel miserable. Nobody wanted to take care of her so it was like she was reliving her childhood, again alone and left behind.
When Scooby was told about this terrible story, we never doubted a minute to offer our refuge and our efforts to find her a definite home where she can finally be happy, once and for all. 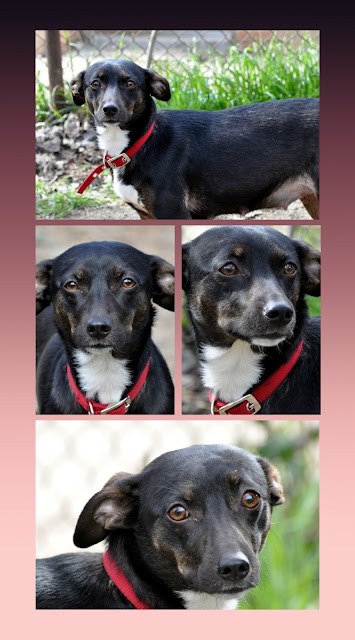 Posted by Sociedad Protectora de Animales Scooby at 12:43 AM


She was born in the streets of Cuellar and due to the rugged terrain we could not catch her, she has lived all this time in the streets, feeding herself with whatever she could find and what some people brought her, and in the end, after a lot of suffering, infinite love for animals and above all an enormous amount of patience we have managed to pick her up and now she’s with us. She is a semi-galga, perrigalga, or a lurcher as the English would call them since she is not a purebred, but who cares. As you can imagine from her history she is a bit scared, not really a surprise. And galgo or perrigalgo, you’re going to have to teach her some manners, not in vain because like I said she has lived in the streets all this time, but I am sure that in some place there will be a golden basket for Carolina, even though lately I am starting to doubt it because the adoption thing has come to a startling halt, now that we need adoption homes because we have a lot of dogs, and now it looks that there are no adoptions, maybe it’s a matter of politics, who knows, but I am sure that for Carolina we will find her a place in this world, like Adolfo would say.
Greetings, kisses, purrs and licks from the animals, Fermin

Posted by Sociedad Protectora de Animales Scooby at 12:33 AM