I like all the animals but obviously I like more some animals than the others, it can be just because they have suffered more at least from my point of view or I don’t know why but the truth is that I like galgos and horses really a lot so now that we have the facilities , we are seriously thinking about to rescue more horses and also other animals so our Scooby can become a real sanctuary for all of them , but we need money for doing that; we need a lot of money , we need to hire more people, we need to pay all the vet bills and they are not cheap.
At this moment we need to castrate 2 donkeys, 2 horses and 2 ponies, and also to microchip 6 of these animals, all that will cost around 800 to 900 euros and this is why I am asking you to help us.
I am asking you to help us with this invoice , but also we need to plan a long term strategy , we need to do fundraising among the horse people, among the donkey people and among the people who consider to donate for all these animals that they are not dogs or cats, we are looking to expand our team with all these people, many of you already know about the Scooby fever with dogs and cats and now we want more people to experience the scooby fever with all kind of animals, we have the space and the possibilities , we only need the money so among all of us let’s find it. Thank you very much, kisses bites and loving neighing. Fermín
Top of Form
Posted by Unknown at 3:15 PM


Unfortunately for  Scooby  we are sadly used to collect stray animals, although we still keep on being surprised about the morality of some people, like in the case of the mysterious dog carrier.

Last Saturday the local police in Medina del Campo came to bring us an abandoned dog , the funny thing was the way they found it:
Around 9.00h am a resident of Medina del Campo, reported to the police because he had found a dog at his home door within a carrier. The agents arrived and found that the animal did not have any identification system, but  the owners had left a half can of food with him.
It is outrageous that the owners are so cynical, leaving the poor dog with food, and also with a sign in the carrier where you can read " I love my pet". Is it awesome.
How people can do something like this? if they had problems with the animal at least  they could show their faces, well, there  are lots of questions , but better not thinking too much. We prefer to act as soon as possible, so the most important thing right now is finding a real family for this little dog. Again we need your help, and once again we thank you in advance. 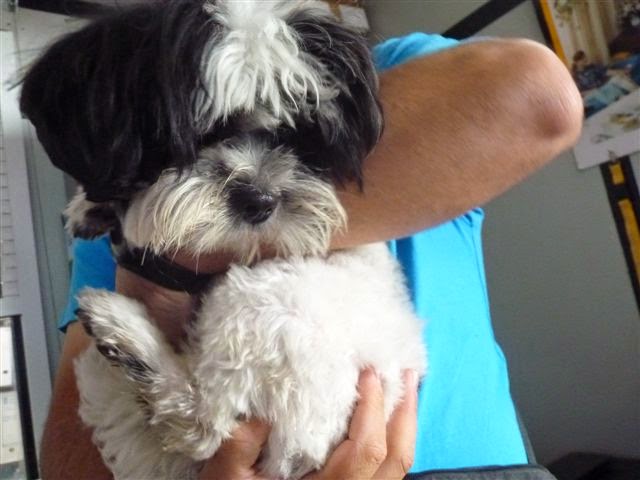 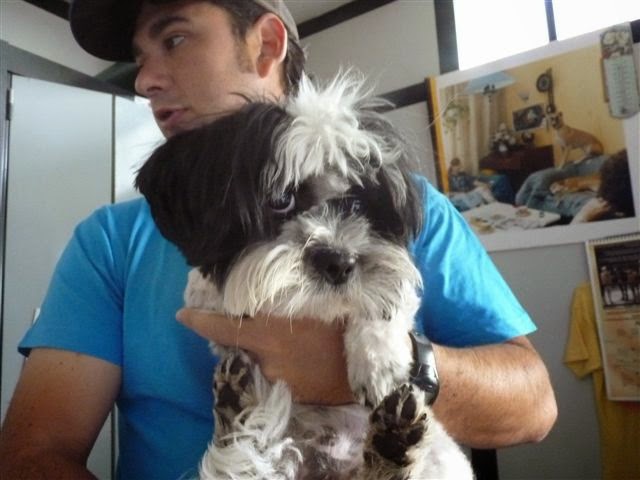 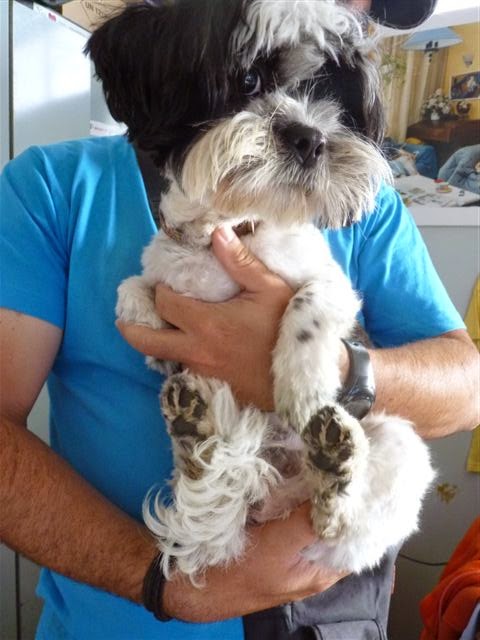 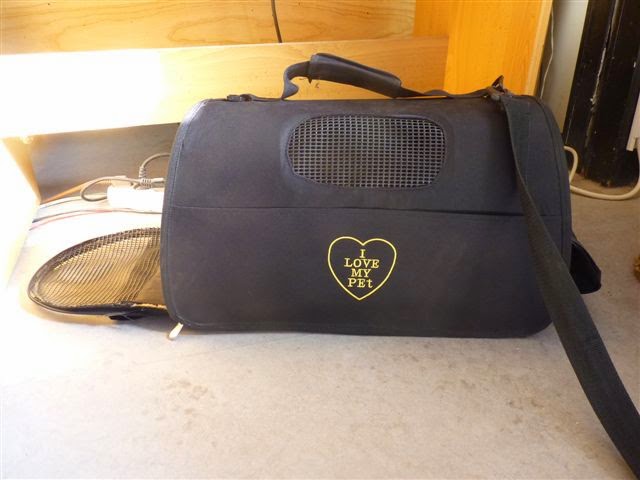 
Poor Campéon, a horse they brought to us last year.  The thing is that he has an infection in his reproductive part and he only feels relief after Dani applies several ointments on his privates and it really makes him feel a lot better, but he is hiding it most of the time, any way, we hope that from all this there won’t be a long lasting lovestory developing between Dani and Campéon;-) 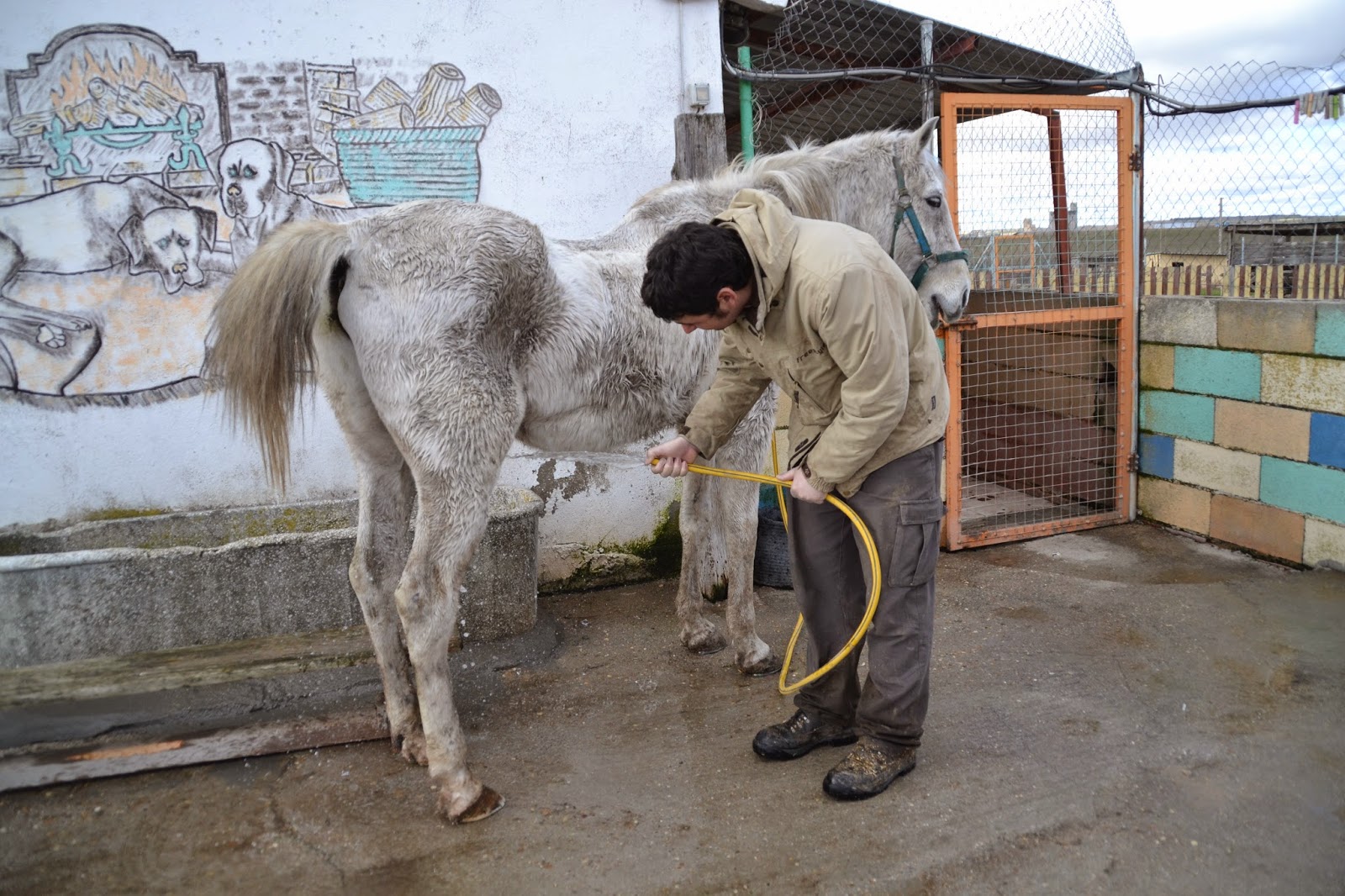 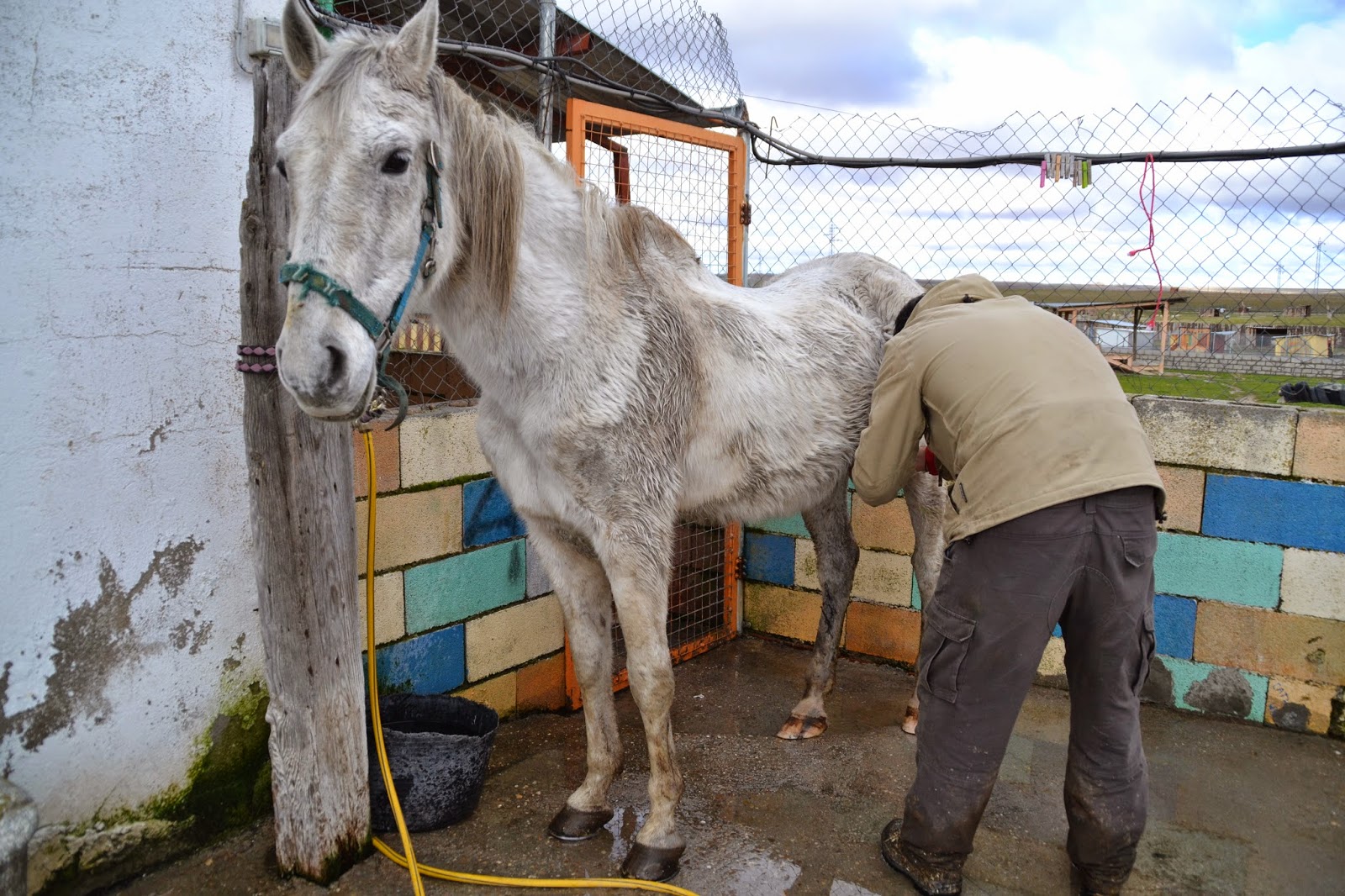 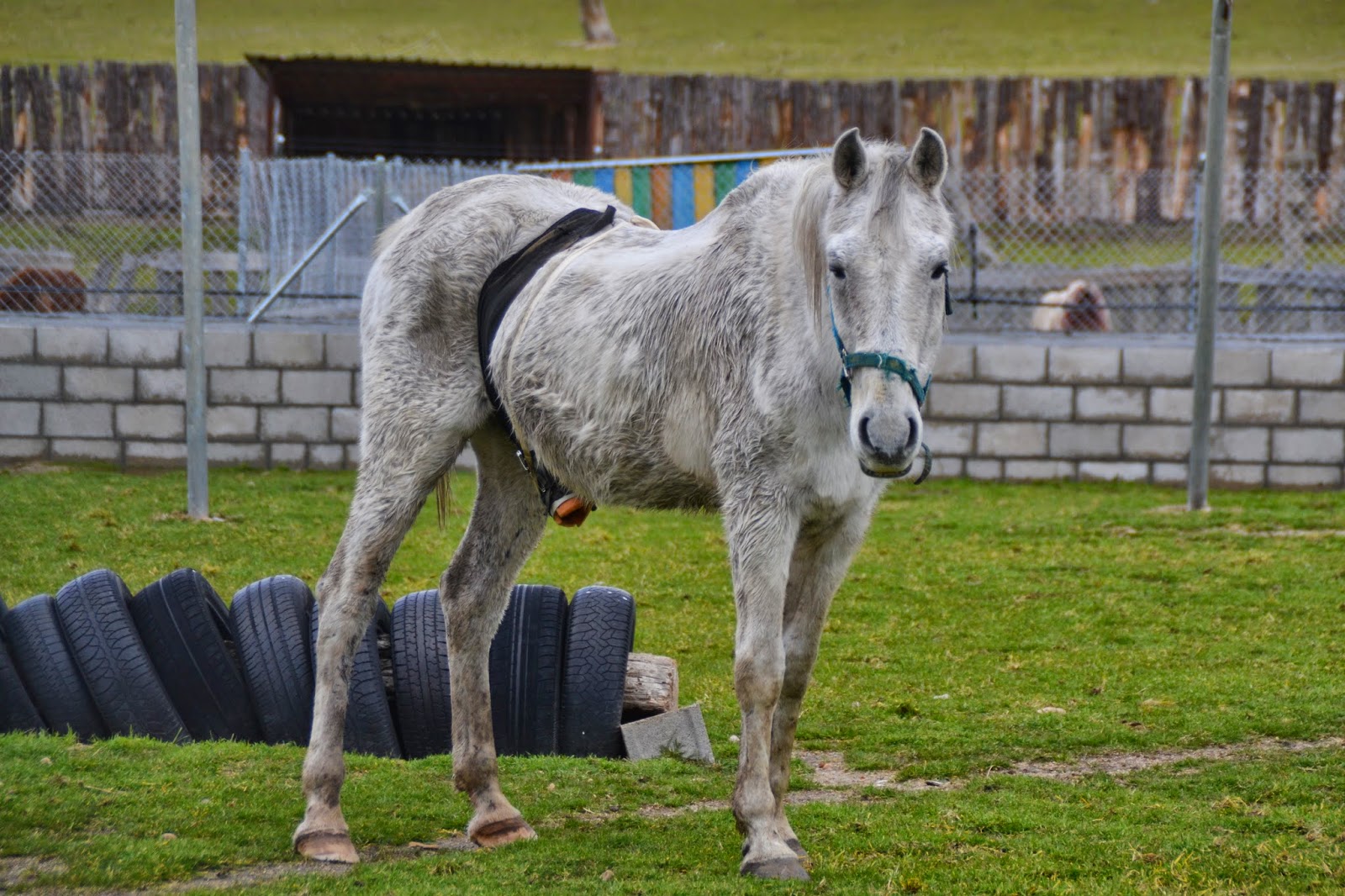 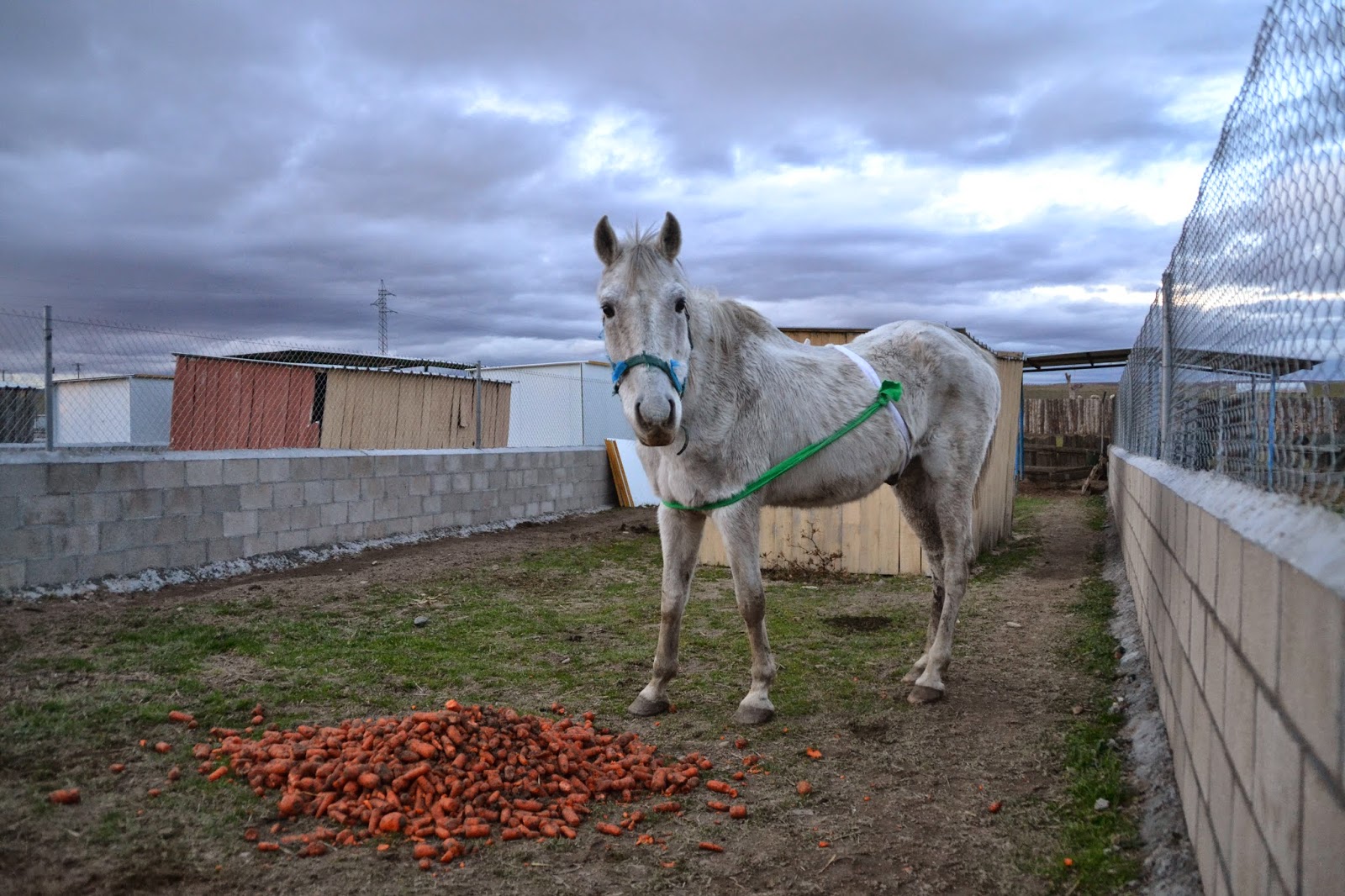 Finally the day arrived, some people were interested in you, they loved the way you looked and how sweet you were and took the decision to adopt you. All of us were very happy for you that you could finally find the home you deserved. We were asking about you and how you were doing constantly, you didn’t like to be left alone in the house and you had a bad time because you thought you were going to be left again. But your owners came back every time and little by little you got over it but this fear of being left alone never left you.  For personal reasons these owners could no longer take care of you and decided to find you a home where you would have more attention and where you could enjoy the company of another dog to be able to play together, and you found it. Another change for you, and you didn’t understand very well why you had to pass from one person to the other, but you accepted because you saw they loved you there as well.
We all thought you were doing OK and that you were happy, and your new owners said that they were happy to have you and that you enjoyed being with your new brother but in a short period of time this all changed. Your current owners decided to get rid of your little brother by giving him to the first person that was interested and they decided to take you to the dogpound. Good thing that we found out what they were trying to do and we put a stop to it, how could they do this to you?
We do not understand. What kind of people decide to give a good life to a dog and then later leave it in the dogpound?  The most logical thing would have been to call us to see if we could help in solving the problem, why did they not do that? Aren’t they ashamed of themselves? They say they cannot have any dogs because they are going to move to an apartment and they just get rid of them like that... like it was nothing ..
Dear CANELA, again you are looking for a home and we will keep on looking for one for you where they will love you forever and ever, we promise and it is our duty to find you these people that will never let you go or leave you, sorry for failing you and for making you suffer, we thought we had done the right thing. We hope we will find you that person soon, enough has happened. YOU DESERVE IT! 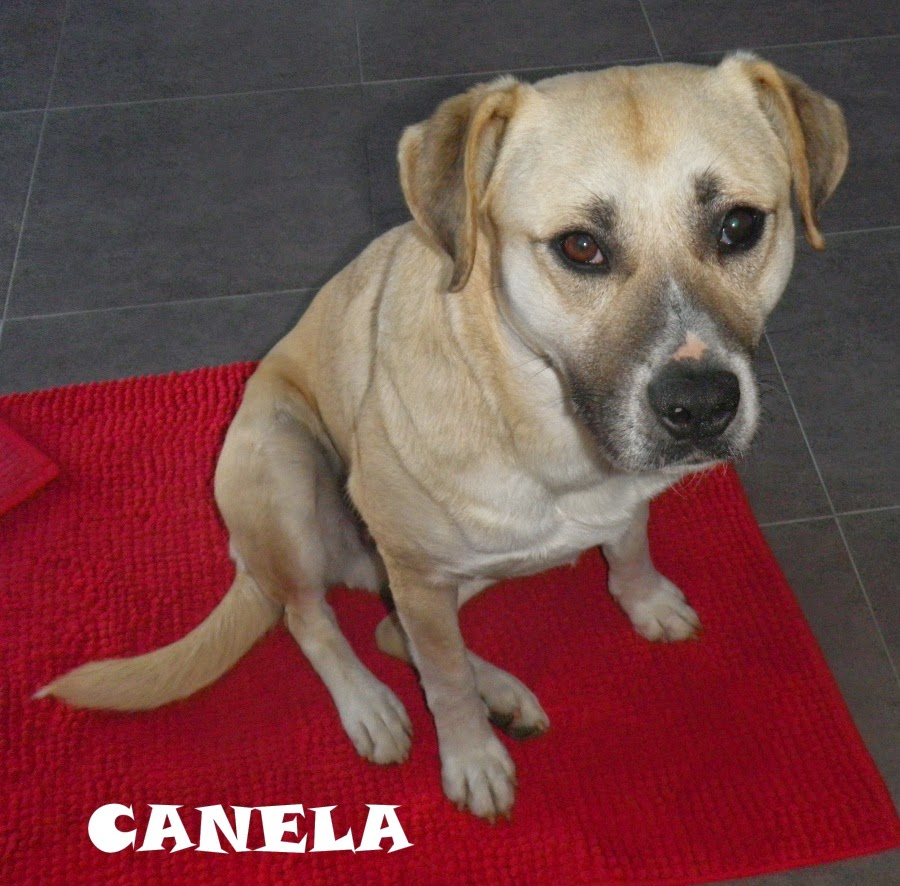 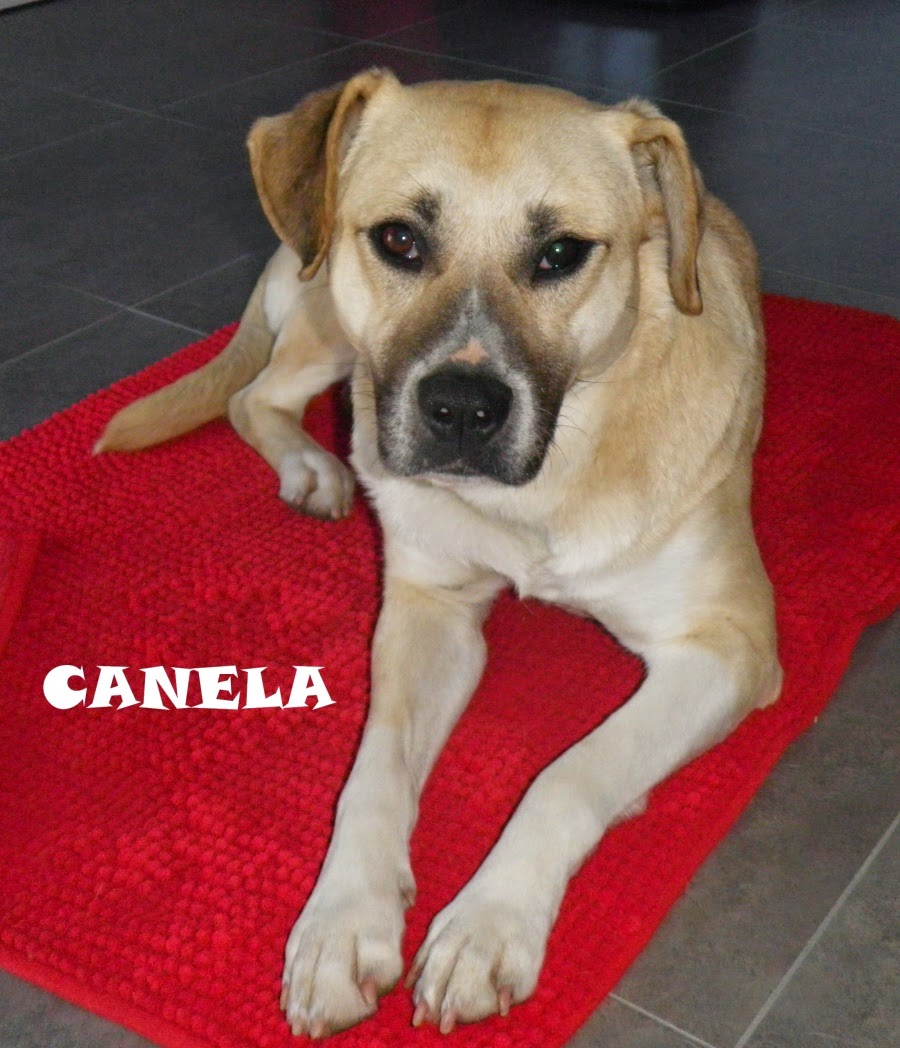 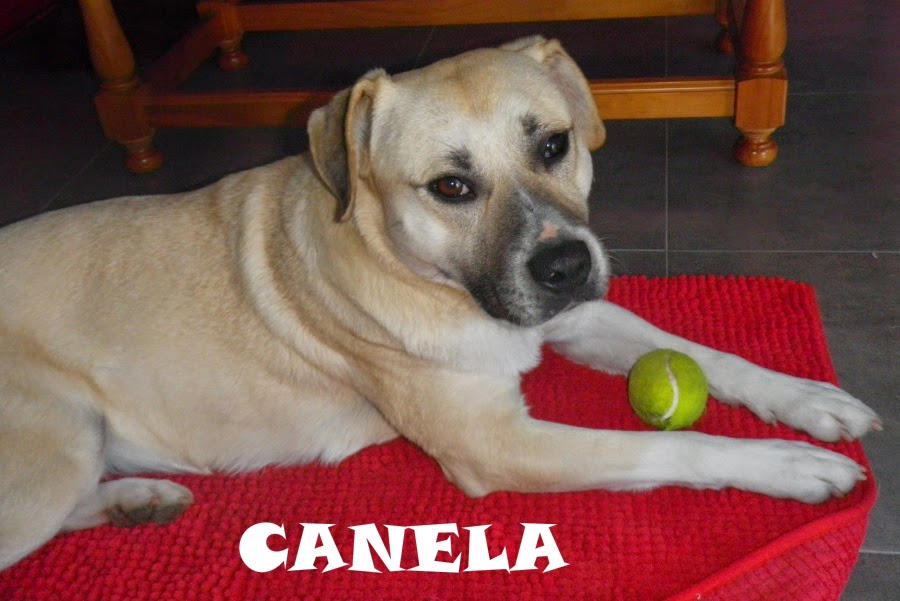 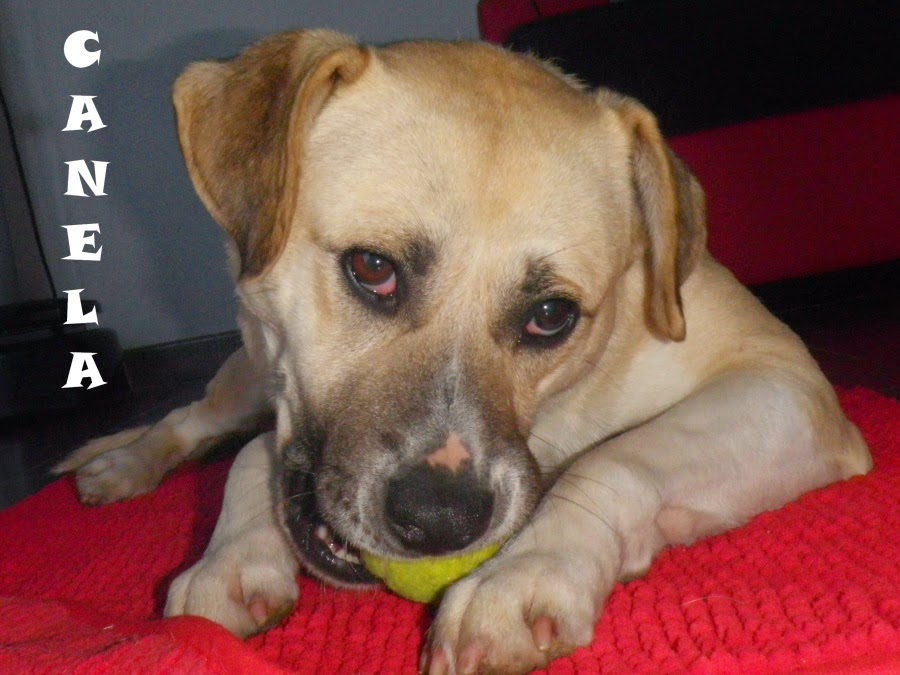 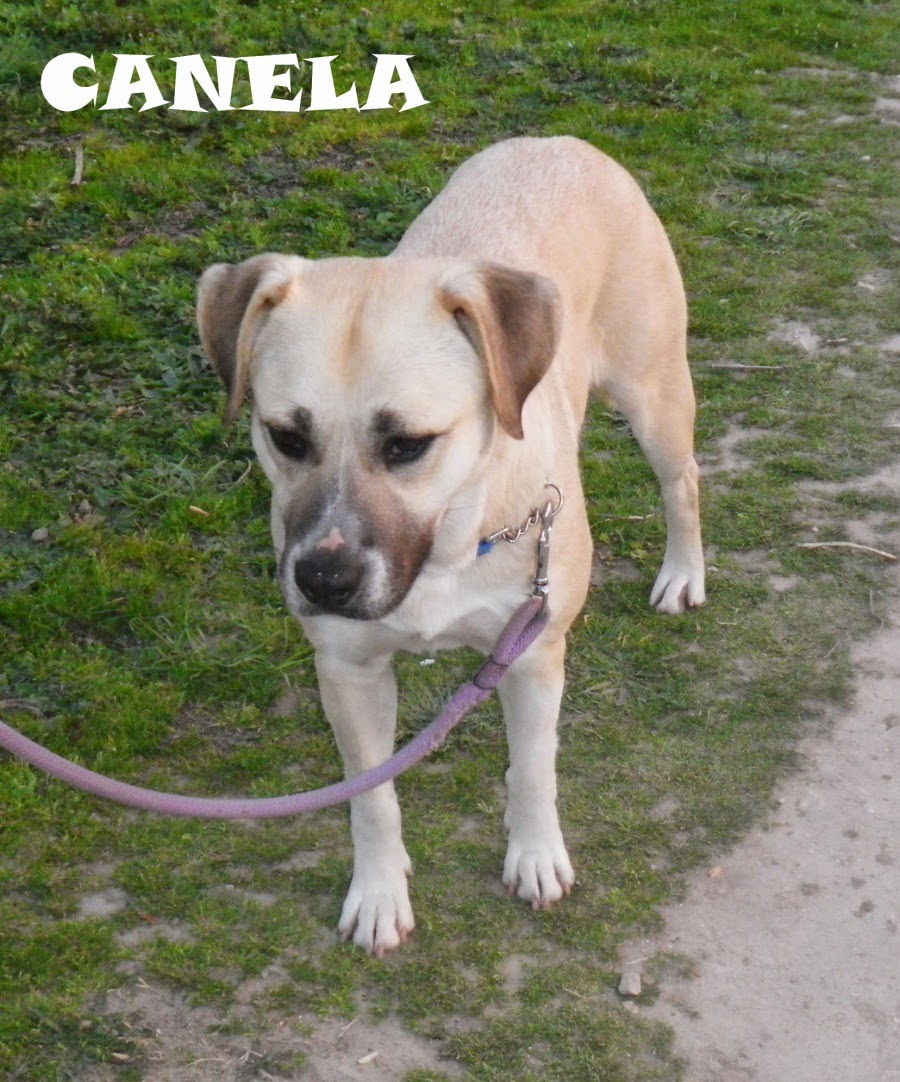 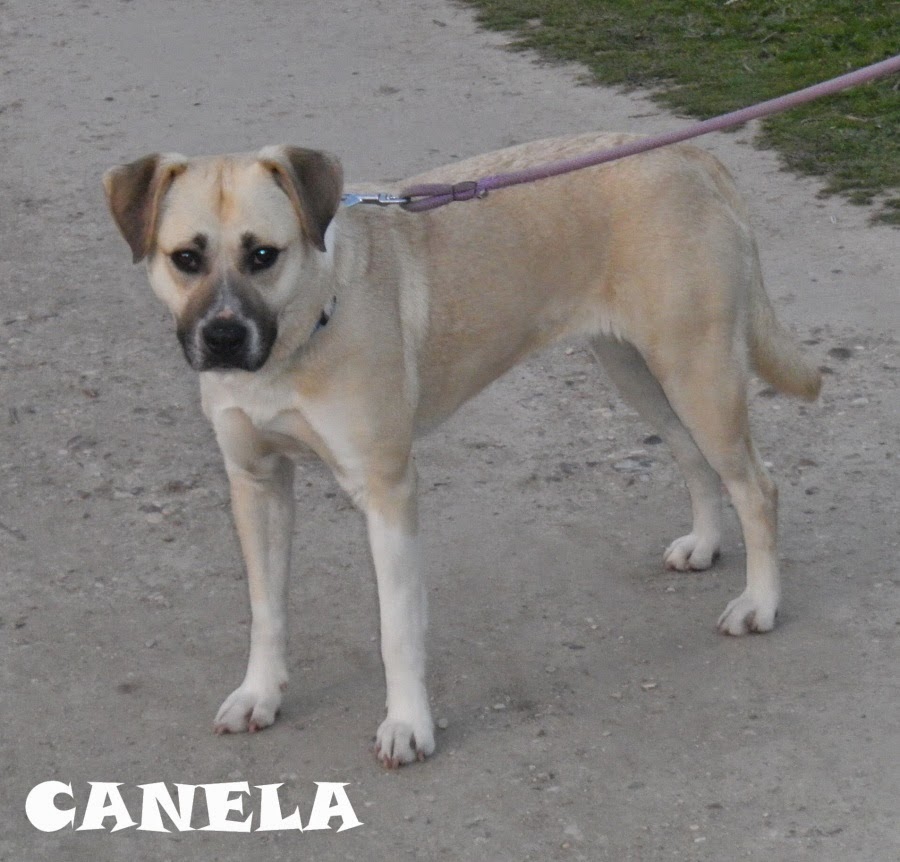 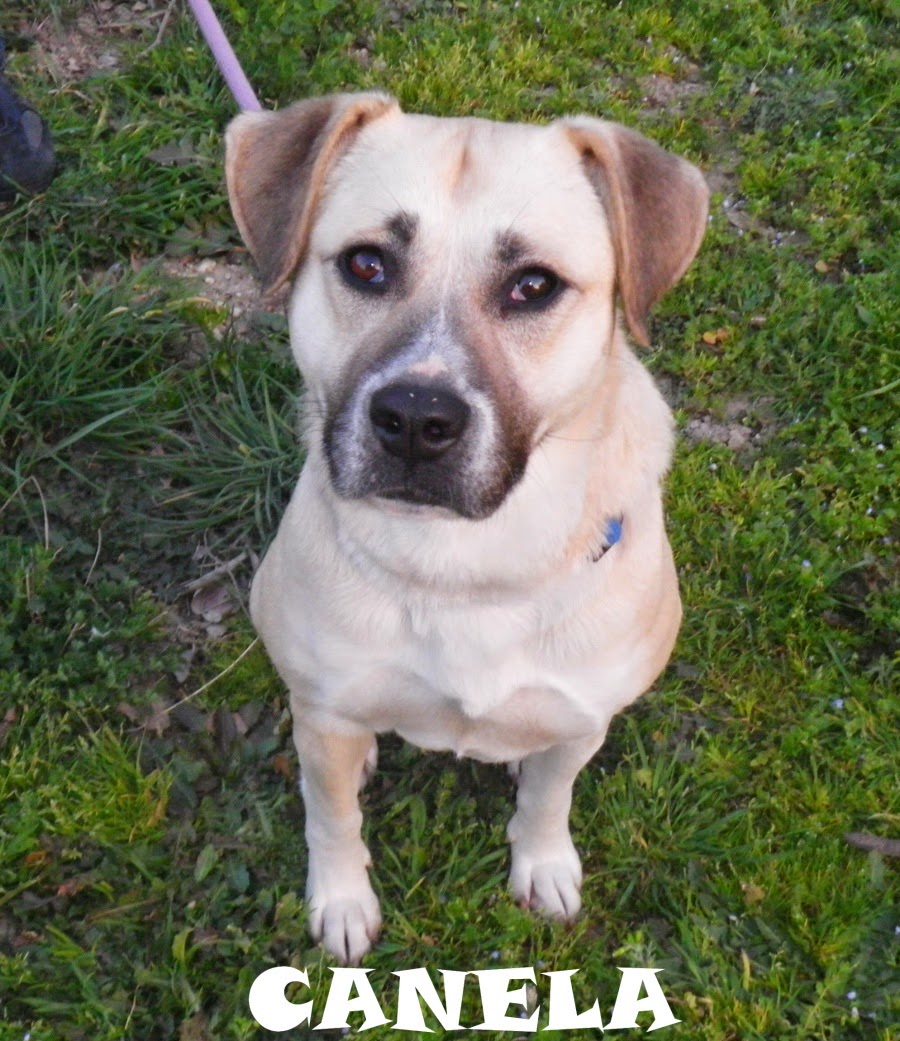 The story of Ned and Carmen


Our friend and associate Carmen has been the involuntary main character in one of the saddest stories that has reached Scooby lately. One of the saddest but at the same time also one with the most hope. She, together with Ned (who used to be called Rufo) are the main players in a story of love, courage, respect and the ability to overcome hardship. Carmen wrote us a letter, telling us about Ned, and after reading this we think there is no one who could better tell the story of her life. We hope it touches you the same way as it did us and that it teaches us to appreciate the enormous heart and respect of people like Carmen. Carmen, we thank you, we can never thank you enough for all you have done and are doing for our animals and I am sure that Ned will always carry you in his heart, as we do in ours.
“Ned”was born around mid july in 2013 in some straw bed with some other puppies, of which only 2 survived, close to a small village with about 500 inhabitants called Carbajales de Alba, in the province of Zamora, Spain.
His mother was a hunting dog, left behind and probably mistreated, because she never came closer than 50 meters to any person, even when they brought her food or water.  This was the kind of conduct that she taught her pups too, so that is why Ned has grown up with little confidence in people. She was admired by people because of her intelligence (the same as Ned), her dedication, strength and sacrifice to get her little ones ahead. It was a beautiful sight to see them together, seeing how she took them to the village in search of food, and to  how they were playing. Untill she got pregnant again and them someone decided to call the shelter to have them picked up.
The pickup was difficult and not very nice, Ned escaped but saw everything that happened. The first days he came back to where they took his mother and sister, alone, scared, barking and hiding when somebody came close. He was  truly lost and did not have anything or anybody to turn to.
In this difficult situation I decided that for the periods I was going to be in the village, to work with him and try to socialize him through my dog (an adopted dog, very old and very exceptional that had also been mistreated in the past). I decided to give him a name so he could respond to that but some people and kids already gave him one: RUFO.
Day by day, petting and talking to my dog in front of him (Ned is very observant and  clever)and later on taking long walks (where he joined us every day), he took a fancy to my dog who he used as help and support and his reference point. He loved him and covered him with kisses. When I was not there he stayed with him and copied his behaviour and in time he started to trust me. I even managed (after a long time trying) to touch him and to have him give me licks. He loved to go on walks and especially to run into the fields chasing birds (he’s very quick!). Playing with other dogs, even with me, trying to steal some rags away from me. Since he is very clever, he started looking for me in the places he used to see me, he recognized cars but he never went into closed spaces, especially if they had a door (he must have remembered the situation when they picked up his mother).
Because of personal problems, I could not stay in the village, nor take care of him anymore and I figured this was the moment for him to find a new owner, because it seems he cared more for me than for my dog. I don’t know if I did the right things, but I never thought it would hurt so much that they took him away. I remember him every day.
This is the story of Carmen, and she is still very occupied with Neds fate, looking out for him and hoping that he will find a home. Now is the time for you to decide and help us find him a family he deserves. Carmen and us will be very grateful. And you Carmen, you did a lot for Ned, don’t feel guilty, there are situations in life that even though we want to, we cannot change them, but we can try to make them as easy as possible. THANK YOU for your efforts, your care and for trusting us. 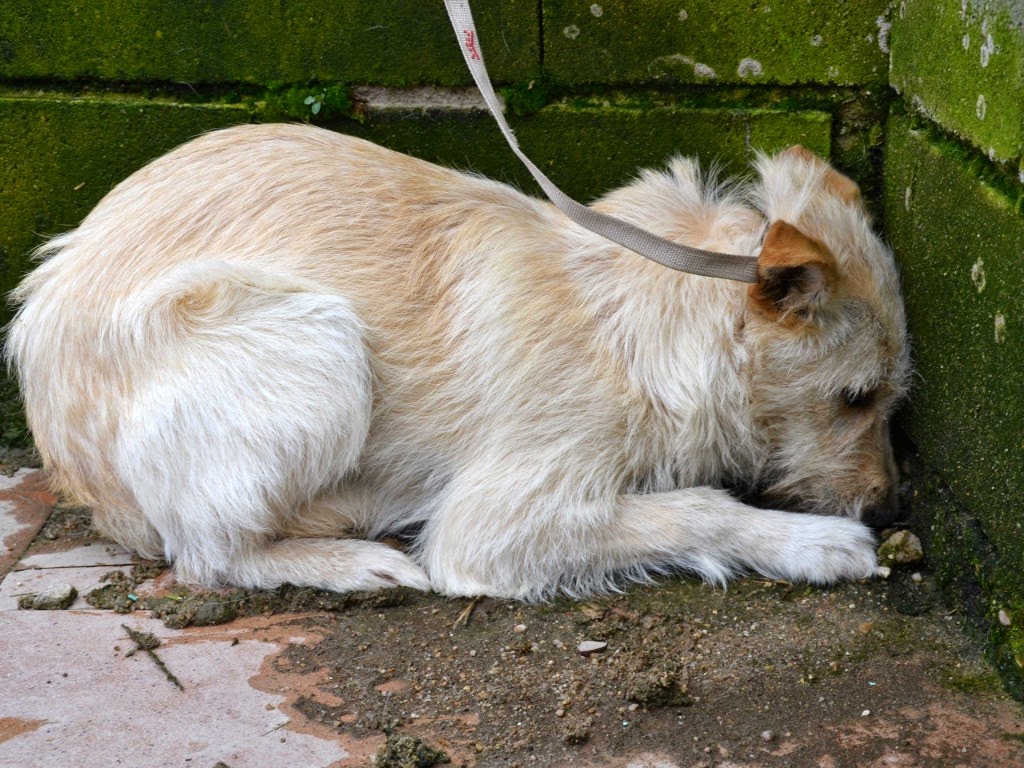 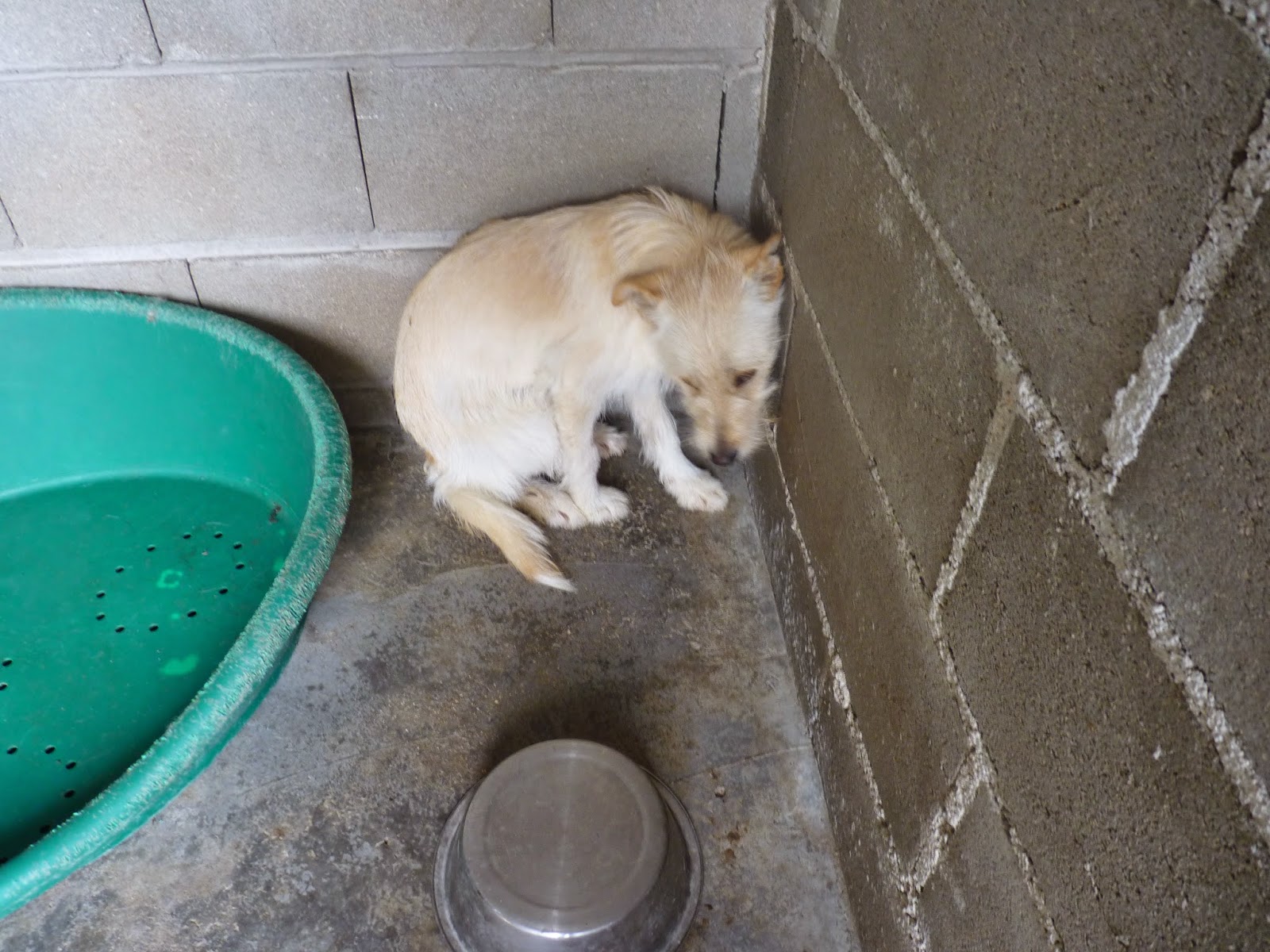 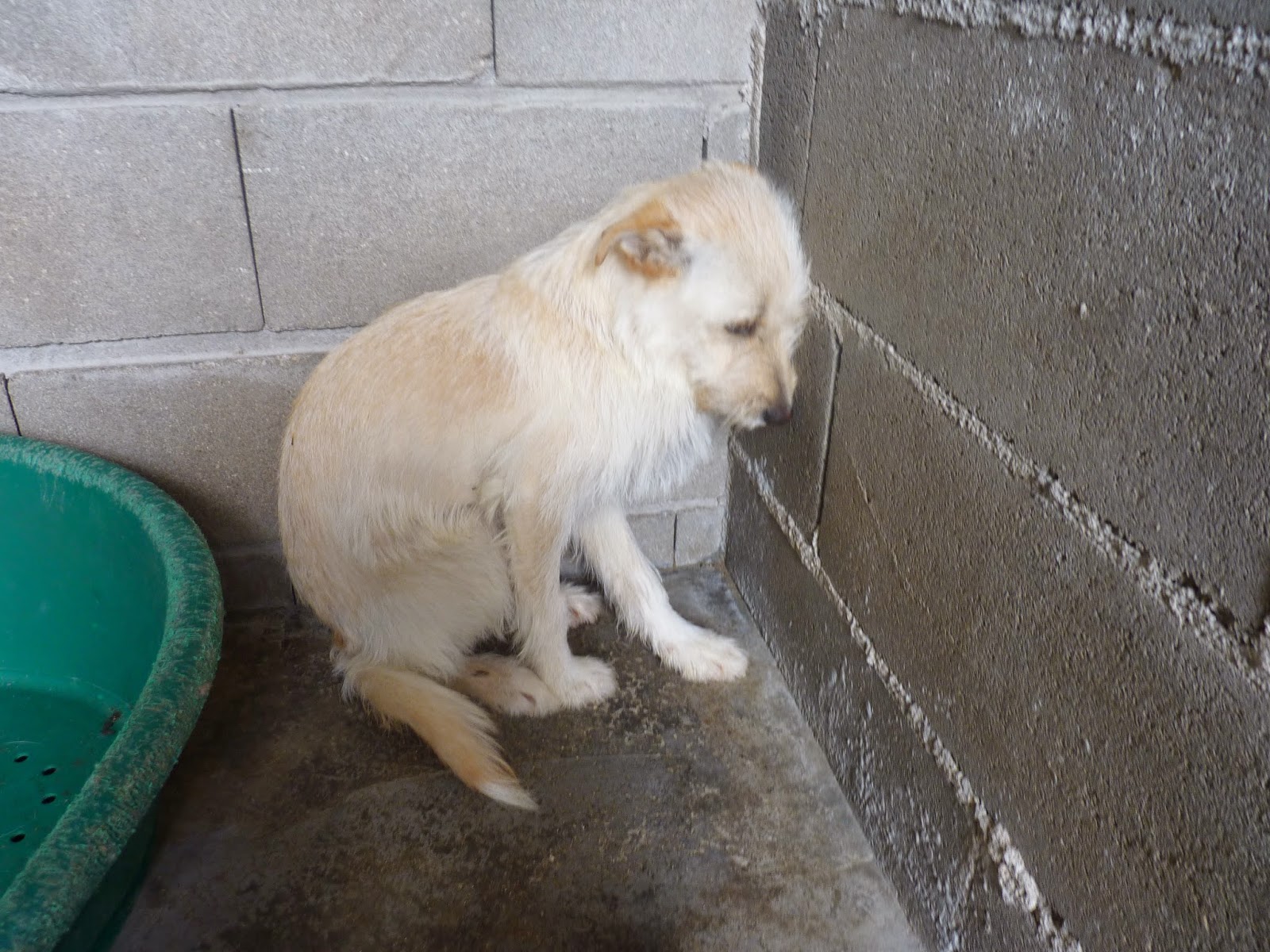 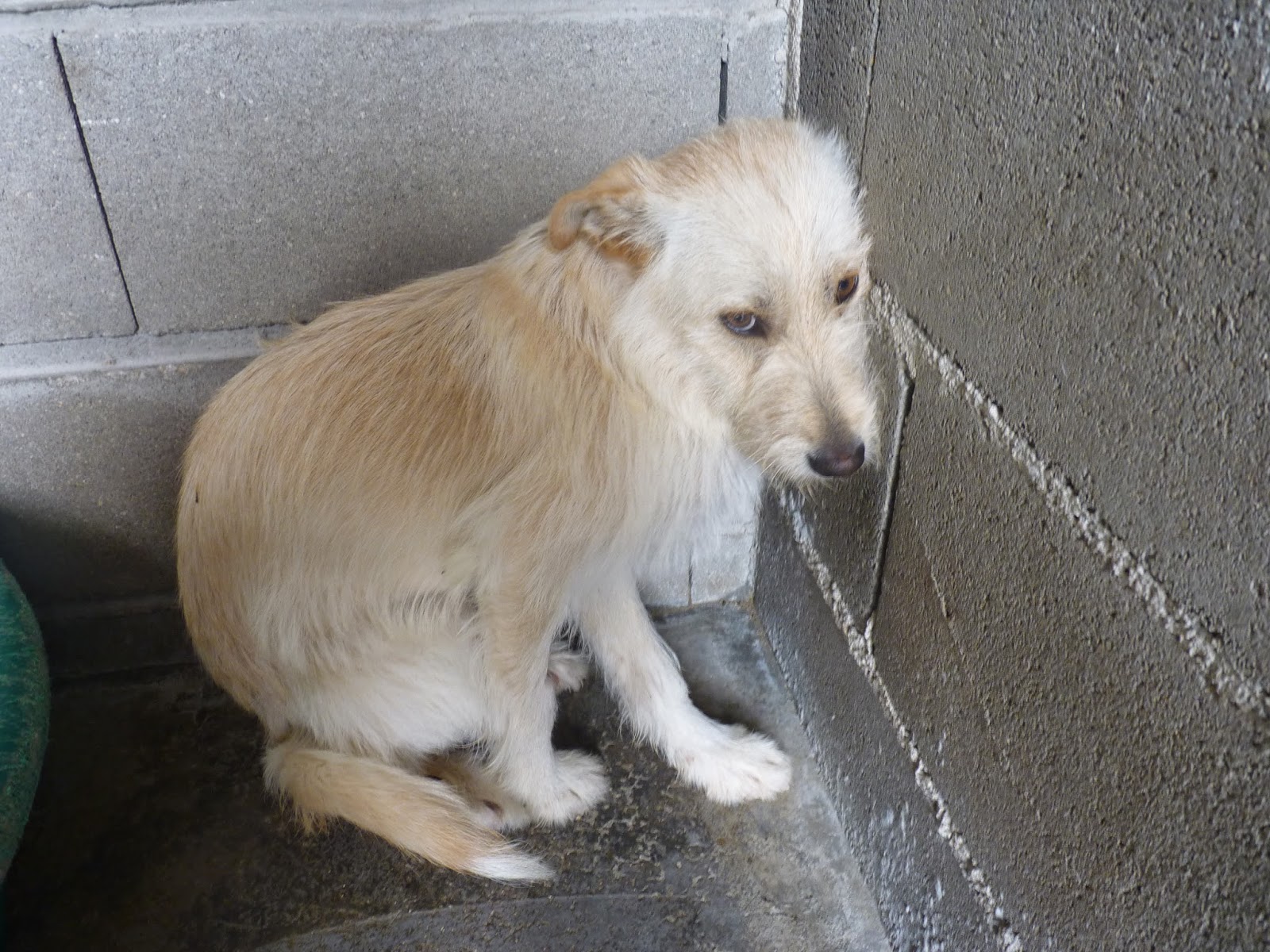 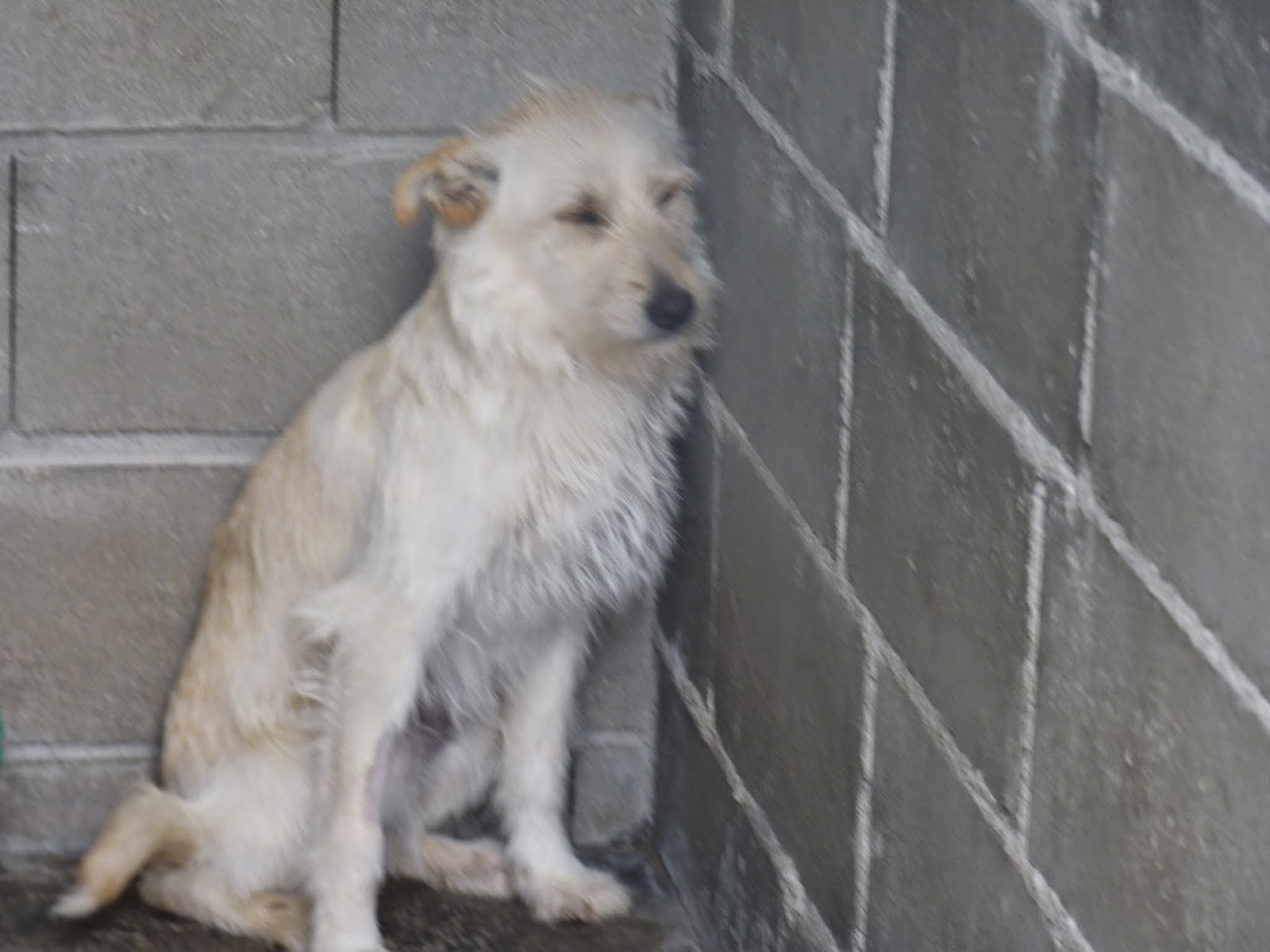 Update: Ned has already found his loving forever home in the USA and he is doing amazing there and making a lot of progress in becoming a happy dog!