A 12 year old dog, sick and suffering from vision problems, dies after his owners abandoned him and  left him tied at the fence of the animal shelter.
Judit Calvo
He could not beat the infection of the parvovirus that he had, but most of all he could not overcome the fact that his people had left him in the harsh new conditions of the shelter that was such a strange place to him.
“He could not stop crying during the whole time he was with us, he only wanted to be carried around in someone’s arms and did not respond to any treatment, this was not normal but it looked that he wanted to die, he didn’t have any will to live anymore.” one of the volunteers of the shelter  Scooby Adopta in Zamora told us.
Towards the site of the municipal dogpound  in Poligono de los Llanos did the owners of Daddy ( a name the people at the shelter gave him) bring him, on a one way trip without return.
The volunteers of the dogpound that were working there at the time found him there, tied to the fence. Frightened and weak he already showed symptoms of being depressed and his willingness to die, which happened only 10 days later.
At the shelter the people were very upset and saddened with this dog dying, 12 years old and with vision problems, and problems with the virus that attacked him. Although not normal, a lot of dogs are abandoned in the last stage of their life, that is why the people at the shelter are anxious to find them a home in the shortest possible time “because at this age and also after spending their whole life in a home, they are not accustomed to the life in a shelter, even though they had all the care needed, they have a vet, a roof over their head, food and a lot of love, the shelter is still a cold strange place and a lot of them cannot start a new life there” complain the people at Scooby.
Daddy has been one of these cases, he lived with his owners his whole life, and at the end of his days, sick and disoriented he had to leave everything that he loved the most, so much that not even the good care and attention the vet gave him could make his strength and will to live return.
Nobody knows what made the owners take the decision to leave him, and a lot of comments were made condemning the situation. Even so, people in the shelter don’t understand how someone could get rid of an animal with whom you have shared your life, one of the theories is that maybe the owner has died or moved to a residence, and nobody in the family, friends or neighbours could take care of him.
Whatever happened, Daddy is not the only example and sorry to say, he does not seem to be the last. “ A lot of times we find animals in the same condition, tied to fences, left behind in cages, in the garbage bin and even dogs thrown over the fence with broken bodyparts as a result from the impact” A harsh reality for the volunteers to witness and they at least hope that people will realize the “serious results of getting rid of a dog, and mostly the older dogs because the moment they leave him, they condemn them to death. Unfortunately very few people want to adopt an adult dog” they inform us from the shelter.
Daddy did have a home in the end, the people from Scooby in Medina del Campo had found him a place to stay with a family of his own when he was a bit better, but “unfortunately it was too late”. At least in the end he died surrounded by care and love.

Posted by Sociedad Protectora de Animales Scooby at 10:28 AM

Posted by Sociedad Protectora de Animales Scooby at 12:16 AM

This galga was hit by a car yesterday evening and the police called me if they could bring her here.

I told them they could, but an hour later, they still had not arrived.
Another woman who had seen the galga also in the middle of a roundabout from a very dangerous highway in Valladolid where she was a danger for herself and for other cars by maybe causing an accident, called Luz Diez and together they could take the galga and put her in the car to bring her here.
So the police called me but did nothing else than leave her injured badly on the road. At least they could have called me again to tell where the galga was, or something like that!!!
She is in a lot of pain but becoming a little bit more relaxed than yesterday evening.
Regards,
Cobie 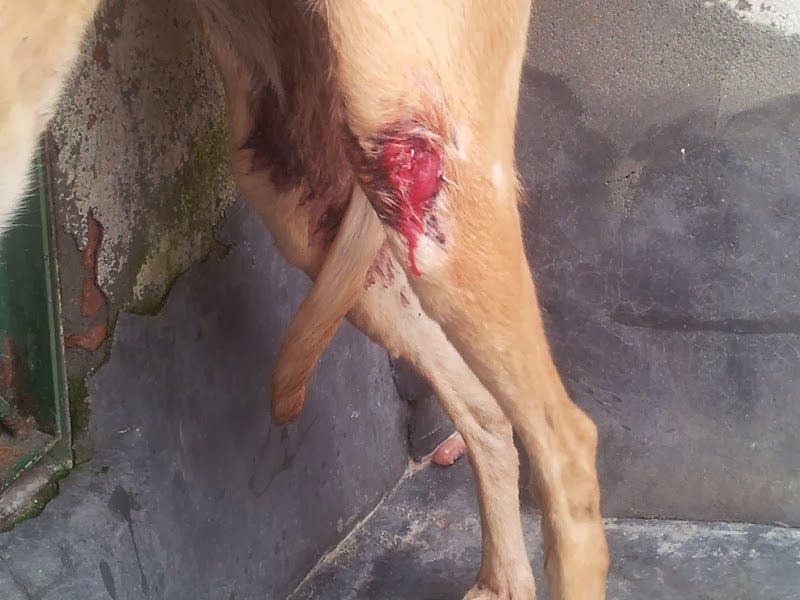 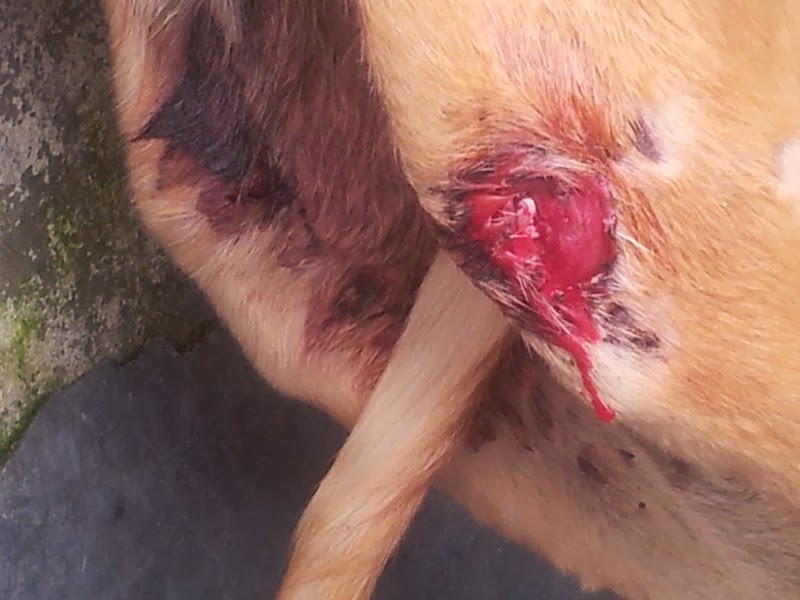 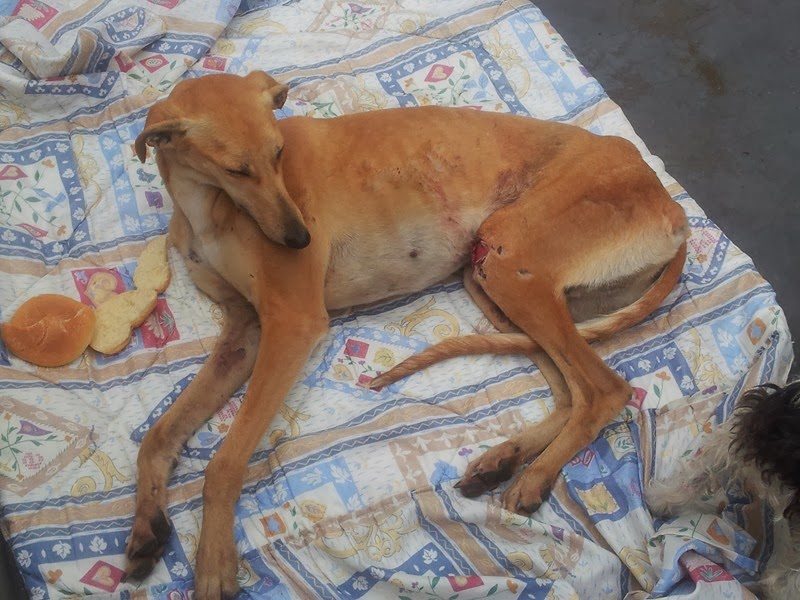 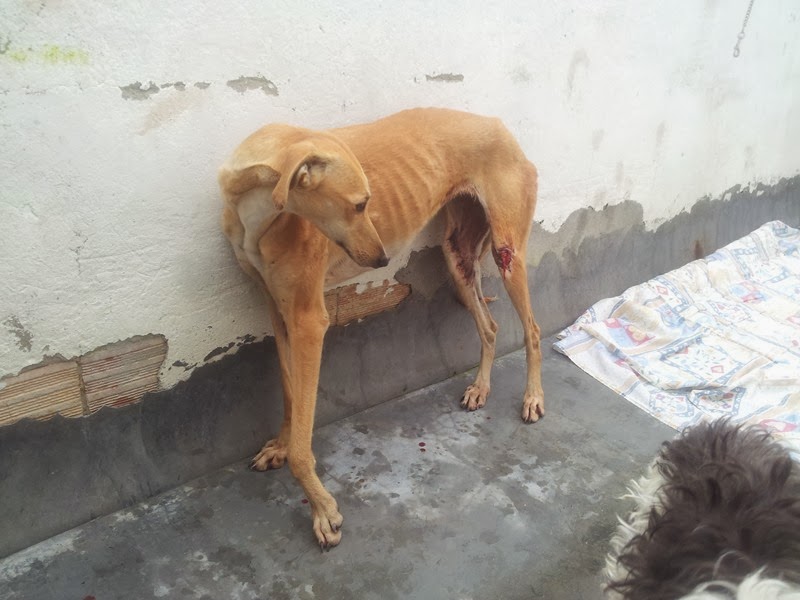 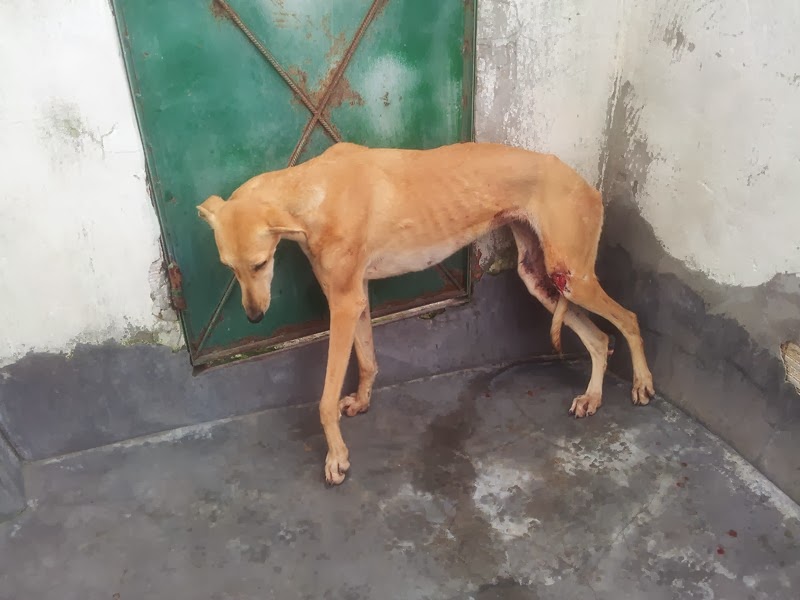 
The thing is growing out of hand, every time there are more and more and many more, the problem with abandoned cats is enormous, hardly a day goes by without us picking up one, we have even started thinking about organising special cat adoption days. They are adorable, they are ready for adoption vaccinated, sterilized and chipped, please help us empty our catteries!  Kisses, hugs and a lot more from our animals, Fermin.
In the pictures there are a lot less than we really have!


http://www.youtube.com/watch?v=hmkZ-P3wP9k&feature=youtu.be
Posted by Sociedad Protectora de Animales Scooby at 12:49 AM


Going slowly with your car around your hometown and all of a sudden a little dog appears out of nowhere, running and with its tail between its legs. At first you think that you give off a different scent and that stray dogs notice that and put themselves in your vision so you notice them, and maybe that’s what he did?
I got out of the car and tried to catch him but he was so scared that the continued running, but I didn’t give up and followed him but everytime I tried to catch him, he ran away screaming and got more and more upset with me, so that made me think about what this little fellow in his short life of 2 months must have been going thru already. Two months and he has already been abused by “humans”,  what type of cruel person could harm such a small and defenseless little creature?
Since it didn’t work with me, I let my dog Asly out of the car and she started to play with him, and I tried to catch him when he didn’t notice but he didn’t do anything but scream and escaped again, hiding under a car. Of course I could not let this pass, I wanted to help him so much that I got under the car to be able to catch him and take him to a safe place.
He finally let himself be caught, but he was screaming and crying, thinking I was going to do something awful to him but when he figured that he was only getting petted and kissed he quickly calmed down. He looked at me with this pained little face and I  told him that he wasn’t going to suffer anymore and that I would make sure that I would find him a home  where he would be happy forever. I think he understood because he licked my nose and I felt like the most lucky girl in the world to be able to save another animal.
Now he is looking for a home, it is a male puppy of 2 months old and he will remain small, he is a good dog, loving, playful.. in short a treasure!


Apy is a little dog, about 3 years old and for me the perfect dog. It is the typical lapdog that follows you around everywhere, when you enter his patio and don’t pay attention to him, he will be jumping around until you give him some attention and he won’t stop until you caress him. Since he is the smallest of the yard (about 6 kg) he needs to jump to get himself noticed. And if you get down to caress him, he gets on your legs and turns himself into a little ball like saying: take me with you please! You can tell he has been in a home and has been given love but you can imagine that people would just get tired and leave him, people are really that cruel. He is having a hard time in the yard since he wants to be loved all the time, instead of being in an unknown place without the constant company of a human, and he finds it hard and cries the whole day, asking for attention from anybody that will notice him. His “previous owners” gave him that in the two short years he has been with them and they took it away from him the day he was abandoned.
He needs a home, he is a very special dog, so if you are looking for a loving dog that follows you everywhere you go and loves you always, you are looking for him!

Posted by Sociedad Protectora de Animales Scooby at 12:08 AM