She broke her thigh-bone when she was 2 years of age which meant that she was no longer good for hunting but because he had paid good money for her, he let her operate because she still could have a lot of puppies, he thought...
They did a bad operation because after 2 years, she still can`t use her leg and she neither seems made for breeding because another 2 years later, she still has not been in heat and now he had enough of her, she had costed him already too much money and that had to end, she had become completely worthless to him and so she had to go.
In fact she was lucky that he offered her for free on the biggest Spanish advertisement site because he also could have got rid of her in a less nice way but nobody was interested in her, no reactions at all, nobody wanted her...
Until Scooby got trace of her, we made contact with the owner who was thrilled that at last somebody showed interest in her, an appointment was made, we drove to the village where she lived, the exchange was done and she was saved from a miserable fate.
And now this beauty is safe in the Scooby residencia in Valladolid, she is so sweet, happy and grateful as if she knew what her fate would have been if we had not picked her up... 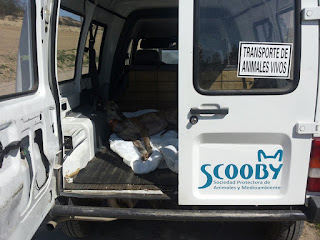 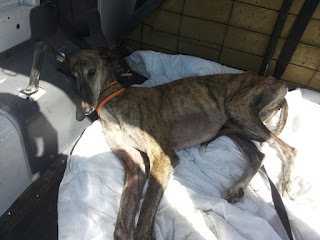 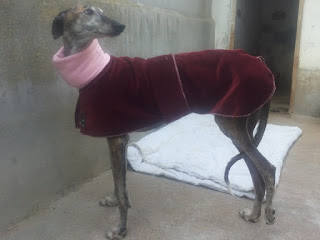 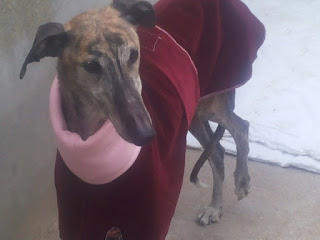 This is the story of Mami, one podenca abandoned on the streets of
Bullas (a hell for animals). Mami has spent months wandering, scared
on the streets.
We can not caress her, we can not catch her, we can not approach
her, her life of abuse alongside some hunter have made her fear people.
A month and a half ago Mami had babies. We've been all this time
looking to their babies, chasing Mami to know where hiding.
A few weeks ago we got to find out where they were, they were in a
hole, was very difficult to reach them.
Mami looked at us,  she looked how we picked her puppies, she cried
when listening mourn, she begged us that will leave her puppies, but
we couldn´t.
Sorry Mom, we had to take your babies, we can´t leave them on the
street waiting for a somebody who hurts them.
We´ll​​​​​​​​ try to find them the best family to grow up happy and
do not have a life of suffering like yours. 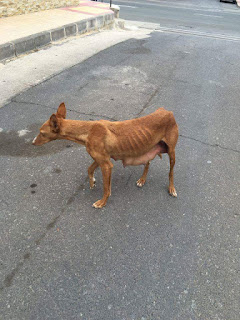 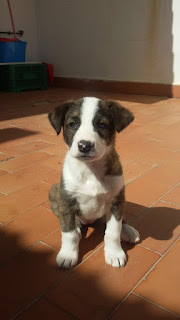 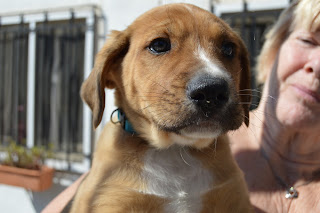 A charity clean-up and start-up

Last week a group of Greyhound Compassion volunteers spent a few days at the Scooby shelter to help the Scooby team. The intake of galgos peaks in the first three months of the year as the galgueros discard their galgos at the end of the annual coursing season.  The shelter was full to the brim because an average of 40 galgos a week had been rescued in the first two months of this year.
We set to work on cleaning up in the paddocks and kennels, not to mention the odd cuddle for a rescued puppy along the way and sensitive touch for the nervous galgos pressing themselves into the kennel wall because they couldn’t yet face human interaction.
There were the usual piles of laundry of bedding and towels which the Pam and Ruth gradually worked through.  The bedding, coat and towel store had become a jumbled mountain in recent weeks making it impossible for the Scooby workers to find towels and blankets quickly.  We established a human chain gang sorting the mound into accessible piles on the available shelving.
Naturally we fell in love with many of the residents whose appealing eyes became completely irresistible.  To name just a couple of the many, Amelio was so sweet and endearing and Austin gently welcomed us into his pen each day.  Numerous galgos were seen to be embracing Olivia, one of the volunteers, as she cuddled them in between cleaning.  They were simply hanging from her shoulders and gently nuzzling her ear.
We had a charity first for Medina del Campo where Scooby is located.  Scooby has been given the use of an empty shop for a small rent and one of our volunteers, Ellie, converted it into the town’s first every charity shop. She spent the first few days sorting the existing stock and making space for donated goods sent for sale.  By the end of our stay, the Scooby sign was over the door and the shop had a doggie corner, bric a brac shelves, baskets of goodies for children and a space cleared for donated fashion items.  This is a ground-breaking initiative for Medina and we hope it will be a success but we’ll have to wait and see.  If it works, this could be a good source of income for the rescued animals at Scooby.  The first few steps bode well.  Before Ellie left on the last morning, she had a few customers who had come in with their dogs adopted from Scooby, a galgo among them, to do some shopping and promising to spread the word amongst their friends.  Let’s hope they’ll be keen to bag a bargain for a good cause! 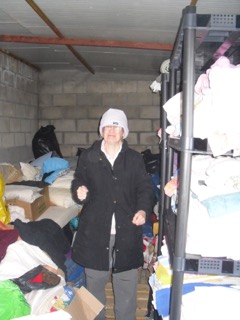 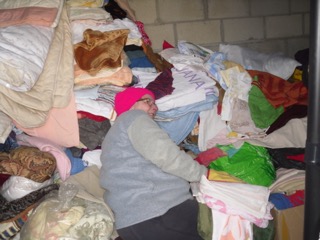 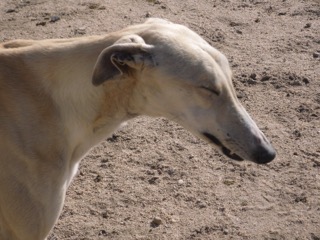 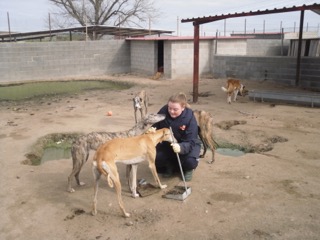 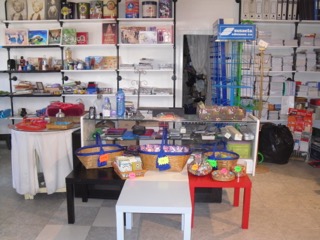 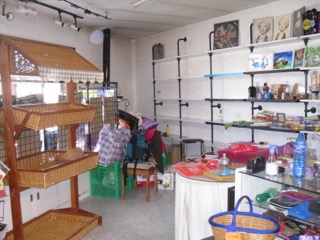 Sometimes we could weep out of pity and rage


One of these moments was the one when we were called to rescue this cat in Villaverde and found this heartbreaking little bunch of misery. We put him under anaesthesia right away, cleaned his wounds, put him on a drip, took several blood tests and hoped he would survive. But he did not. We had to let him go and release him from his suffering. He was extremely dehydrated, he could not move properly because his nerves were damaged, he probably suffered from advanced cancer in both of his ears and all this proved to be too much for this weak and small body to cope with. We don´t know what happened to you, little boy, and the worst thing is  we no longer have the chance to make it up to you. Another precious life has fallen victim to cruelty or ignorance or both. We tried our best to save you but had to watch your “light” slowly fade away... That is the negative and sad side of being involved in animal welfare: we do not always witness happy endings.
This is the second case in a short period of time that we have seen an advanced stage of cancer in the ears of a white cat, so please, be aware that, if your cat goes outside, you need to apply sun block to your cat's ears and nose  during the summer  (or sunny months)  to avoid the sensitive skin on those areas getting burnt, thus, decreasing the chances of them getting this type of cancer. 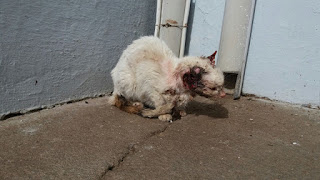 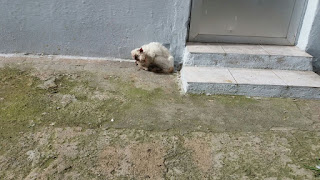 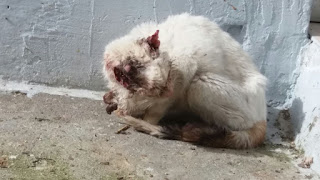 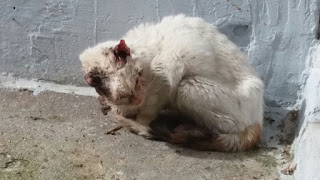 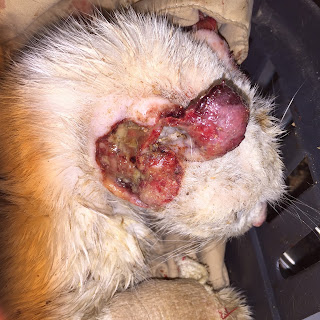 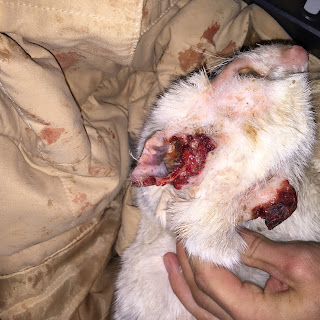 So far this year, Scooby has already rescued a staggering 400 Galgos!

Just only in January and February, more than 400 galgos were saved by Scooby from all over Spain but of course, the dogs are brought to the killingstations the whole year around because for the galgueros they are nothing more than a tool that has no value at all anymore...
This week there were again 3 galgos in the perrera municipal and 2 in the perrera provincial from Valladolid which all were saved by Scooby and now safe in the Scooby residencia in Valladolid.
We are more than full right now with galgos at the end of hunting season but we will not let them down and appreciate your help to help them to get a better and dignified life because that´s the only good thing about being brought to a killingstation by your owner, if you are lucky and somebody gets you out in time...
Cobie
There are plenty ways to help us:
Making a donation: http://www.scoobymedina.org/en/how_you_can_help.html
Making a virtual adoption: http://www.scoobymedina.org/en/virtual_adoption/index.html
Adopt one of our animals: http://www.scoobymedina.org/en/adoption/index.html
Become a volunteer: http://www.scoobymedina.org/en/volunteering.html
Join the teaming (for only 1 Euro/month): https://www.teaming.net/scoobymedina?lang=en_UK 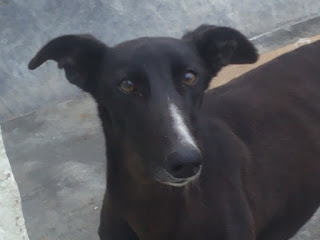 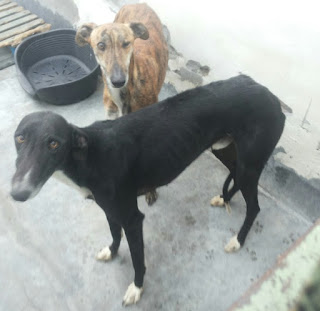 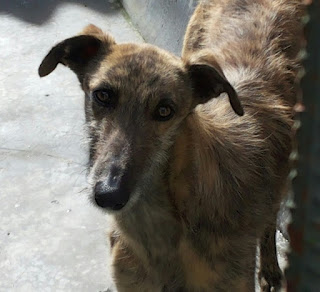 What the galgos eat.


Normally went the hunting season is finished the galgos are not useful for them anymore and they don´t feed them properly so the poor galgos need to eat whatever they can get, this pooh is from one of the rescued galgos from Extremadura. Without words. Kisses, licks and hugs from all of us. Fermin 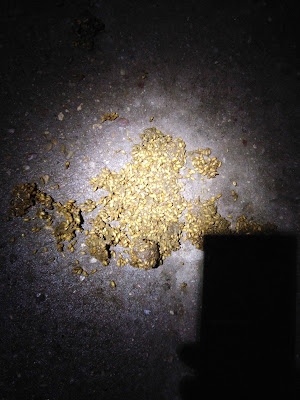