This story might not be especial at all to any of our readers, it might be (unfortunately) just a story about just another abandoned dog in Spain. But to me and my fiancé it is not just any story, but it’s the story of our PIPA (that’s what we called her)

A few days ago, we were driving in our car on a secondary road when the car before us all of a sudden braked, and when we saw why they braked we could not do anything but stop, it was a little dog, a mastin puppy, and my boyfriend stopped the car and went to pick it up, it didn’t offer a lot of resistance but it was very scared. Once in the car, the poor thing was so tired that it laid down and went to sleep straight away. When we got home, it only wanted to eat and sleep, who knows how long it was running around on the road already.. It is a female pup and a very sweet one, even though we know her just a few days, she already starts to wag her tail when she sees us.
But the question now is: what to do? We took her home but we knew we could not keep her there because we live in Germany and they won’t allow us to keep animals in our apartment. I did not want to bring her to a doghouse because I was afraid they would put her down, and also  we think she could be deaf because she has a hard time reacting to encouragements. And we would not want to give her to just anyboby because we don’t really want her to go, but then we would want her to be safe and happy. In the end I got in touch with Scooby and they came to collect her, it hurt us to see her go but we know that she will be fine in Scooby.
This is the story of PIPA, one of many , but special for those that know her! And we hope she will find a family that will give her all the love she deserves. 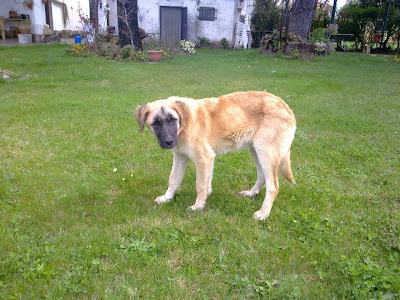 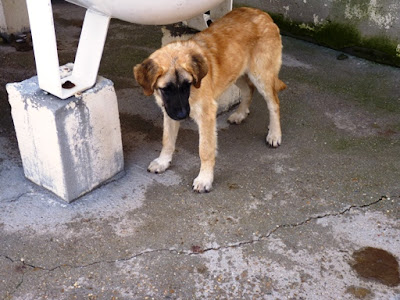 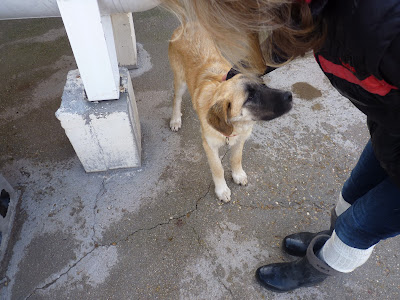 Top of Form
Posted by Sociedad Protectora de Animales Scooby at 1:06 AM


At Scooby we are in a process of constant improvements, especially for our animals, when we find a problem, we try to solve it as quickly as possible within our means and therefore we now have finished the cages for 7-1, 7-2 and 7-3 and they sure have come out luxurious. This makes our capacity of housing animals almost grow 200%. We have started to make an access alley to patios 3-a, 3-b, 3-c, 3-d and 4-a, 4-b, 4-c and 4-d without having to cross the other patios full with dogs, which normally was a problem and especially a source of stress for the dogs, some of them were terrified. This alley will also make the animals in those patios better to be seen so when somebody comes to adopt we can come closeby to show them their future adoptants, so, only good things! 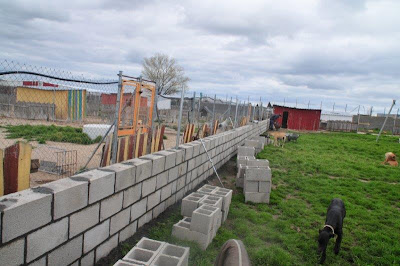 Posted by Sociedad Protectora de Animales Scooby at 12:03 AM


Well, any kind of education is very important and at Scooby we have an educational potential that is very very very important, based at first on our dogs and cats being here, most of them galgos, we are going to plan an educational process, of compassion for animals, ways to prevent abuse, unwanted litters, hoping that our visitors, when they find out that our animals are neutered see that it’s not a bad thing but it only is advantageous, and then we hope that they will do the same with their pets, prevention of abandonment, animal education and promotion of adoption vs. buying.
We also have the enormous potential of the farm animals, through them and their different stories we could explain how they live in a farm and all the suffering that implies, but also that the children can interact with the animals, we can imagine that they will be able to touch them, groom them or feed them.
And if that is not enough, we also propose to form a zoo of silhouettes that are pictures of our own animals from our ecosystems; we are going to start with reproducing a cereal steppe, a Mediterranean forest and a riverside forest and wetland with animals belonging to each of these ecosystems. Activities will be especially for schoolchildren of different ages, we will make a field guide with different educational activities, I really do believe we can make history in the world of animal protection, with concepts of animal wellbeing that are not well known in this Spain. I will keep you posted on how things progress. Loving kisses, bites, crowing and meows from all of us. Fermin 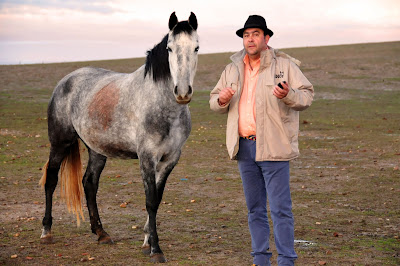 My run for Scooby

“Two minutes until we start!” said a voice through the speakers and the drumroll started. I was already nervous, but this made the adrenaline run on a higher level! A wave went through all the people, from the starting line until the end of the street and back. My brother and I were somewhere in the middle of the crowd. I was ready to go with my Scooby shirt on, old pants and (like a friend said later) ‘retro’-shoes, from the time I had gym at high school. “So on what time schedule shall we run?” asked my brother. “Haha! I just want to finish these 5 kilometers without dying!” I have been training from scratch for this run for only two weeks and that was really hard, so I just want to make it to the finish. For me and especially for Scooby! Many people sponsored me per kilometer, so I have to finish! “Okay” my brother responded without listening to me “we will aim at 6 minutes per kilometer”.
And then BANG! the run started! The first people started to run and the crowd moved. After about a minute I crossed the starting line and my brother/coach already started to coach me: “Come on!!!” “You can do it!”. At the first 2 kilometers there were a lot of people with different paces, it was a bit difficult to run at a comfortable speed, so I tried to focus on my breathing and on not to run over kids or an old man. When we were half way my coach told me to run a little faster, but I was afraid that I wouldn't make it to the finish if I did. But around the 3,5 kilometer I thought, why not? So I accelerated a little. At 4 km again a little bit faster and at 4,3 even more. And as soon as I saw the finish line (about 300 meters to go) I started to fly! I ran as fast as I could and I finished!!! And I did it in ...... minutes! Not bad for a first time. And I didn't die! I thought I would after the finish of course, but hey, I finished!

Which means:
Almost 250,- euros for Scooby!! How great is that! So I can keep on adopting for Amelia virtual another year! Thank you all very much for sponsoring me!
A big kiss from Amelia and myself.
Claire

It has been a long time since I have last told you a story, but the truth is that apart from taking the Ester week off, I have been busy with other things. Anyway, I am going on and on and I better get focused. I just wanted to tell you that we have rescued 200 chickens from a henhouse. Those kind of chickens that are typically abused to get their eggs. Those kind of chickens that live their entire lives in a cage and when they are no longer profitable they are taken to the slaughterhouse, being this their last and only chance to ever see the sunlight.
To tell you the truth, this is one of the rescues I feel more proud about. Because before this, I never understood why rescuing chickens could be this important. It seems such a small grain of sand in the desert! We rescued 200 but in that same place, one million hens were sacrificed! I have become a hen´s fan because although it is only 200 hens, they are 200 animals that are living freely, enjoying the sun, the ground, enjoying each other’s company and also the company of a rooster, who, by the way feels the happiest among everybody else!  For me, it has been very touchy to have been part of the team that, despite all the selfishness that we, as humans, bear, has been able to release these animals into a more natural life. To participate in their rediscovery of joy for life. They came with us inside their little cages, behaving like “eggs makers”, instead of animals. We brought them and when we opened their cages they didn’t want to step out, they couldn’t even walk. I opened their doors expecting them to run away searching for freedom, but nothing further from reality. They had spent their entire life inside a cage and they could not walk. We them took them out (many of them feathersless) and wherever we put them, they would stay altogether, still and fearful. These last few days it has been raining dogs and cats in Medina, but they wouldn’t look for a refuge under one of the booths built for them. Instead Simonetta and I would have  to take them one by one and put them inside the henhouse all soaked. We kept them there for days and little by little they started learning. At the beginning they didn’t know how to reach a pole to rest. They just would get close to each other looking for protection and heat, so much heat that we have lost 20 of them from suffocation. They had even lost their instinct for hatching their eggs and all their animal instincts. Even more, one of them who had a dislocated leg was put inside the henhouse and spent a week without moving at all. 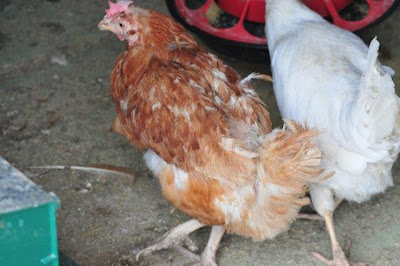 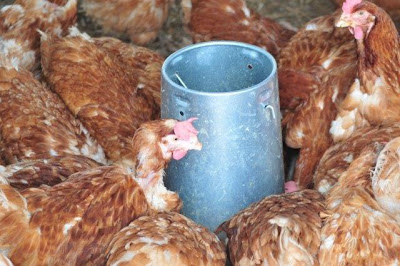 Fortunately Mother Nature is wise and has taken care of this. Many of the hens have stayed with us for several weeks already and now they behave “naturally”. When they see me coming in, they follow me running and flapping their wings, because they know I am bringing them food. They dig on the floor, lay on the ground and lift their wings to catch warmth, they have sand baths, climb to the poles, sing, lay eggs in the nests, eat grass, feel a cock on them although they do not know very well what is that for and no one has died anymore. 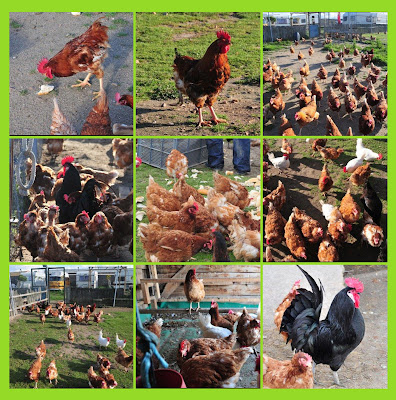 And when I come in, they come to welcome me and this may sound strange, but I can see a smile on their beaks and happiness glowing in their eyes. It is probably silly but I think they are now happy hens and they repeat it to me every time I see them. Now I say that we have adopted chickens and I am proud to be able to give them an enjoyable life and be able to restore some of how much they have done for us. I am a chicken fan. I am given so many bites, hugs, purrs and now also loving cackles.


PS. The limping chicken is still alive and is very funny to see how it moves as is hopping from place to place, and the last news is that they are starting to have some feathers and they just look lovely funny. 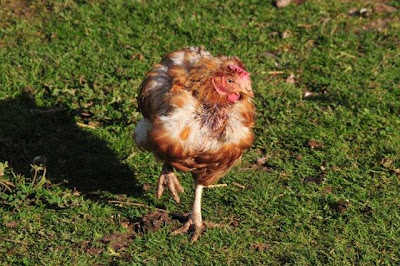 Posted by Sociedad Protectora de Animales Scooby at 12:31 AM