Litta is hardly one year old, but has already been abandoned and has witnessed her entire family coming to Scooby and finding a home of their own – now she’s the only one that hasn’t been adopted yet. What may be the cause of that? Maybe it’s because she is a black dog who doesn’t stand out from the crowd at first glance. In any case it isn’t her fault – she’s an absolute darling.

Litta was born May 2010. Her mother was a gorgeous and elegant pointer lady, we think her daddy must have been some kind of sturdy labrador. The two of them were proud parents to a whole litter of pretty, funny and playful pups who were wanted by nobody at first, so Littta and her little family (just dad was not present) came to our shelter.
Going into the paddock and taking pictures of this band of rascals became a near Olympic sport in the ensuing weeks after their arrival since the wee pups were growing at an astonishing speed.  Of course they all wanted to say hello at the same time, they hopped around, played, ran around – but even then Litta was the one that wasn’t pushing to be up front. She prefered to take in some sun, or simply waited for her siblings to calm down and go back doing their own thing and then she would step forward and receive her daily dose of cuddles. 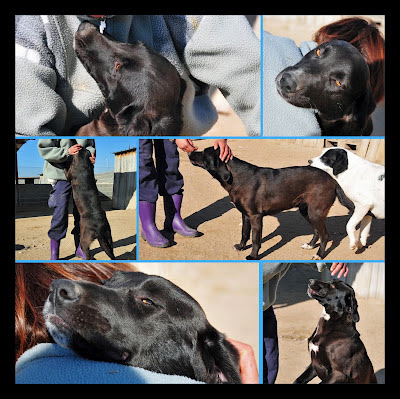 Today she is more or less totally grown up and she has turned into a wonderful dog: very loving, strong, playful, but at the same time with a pleasantly calm nature. She is very good with other dogs, even doesn’t mind if they are pushing her boundaries a little. As an extra plus she is doing well on a lead and she is also good with cats.

When visitors come by she is beside herself with joy. She walks up to the visitors wagging her tail off with pure joy and loves being hugged. She presses herself against you and showers you with hugs. If she had a say in it, she’d have cuddle sessions like these all day long.

It is obvious that she is craving some human attention. It’s definitely noticeable and she sure wonders what she has done wrong that she is always left behind while all the other dogs around her get adopted.

All we can tell her is „Nothing, dear Litta!“.  She just needs someone special who’s willing to look closer, enjoying her beautiful black coat shining in the sun and finding that her beauty lies also within.  We hope this special person will soon fall in love with our Litta, because she has known nothing but our shelter in her short life and this should change – the sooner, the better.

Protest against cruelty to animals throughout Spain on Sunday, March 25th 2012

Last sunday, 25 March 2012, there were organized demonstrations throughout Spain against animal cruelty and for the strengthening of the penalties imposed on the perpetrators. In Valladolid as well and in the evening between 7 and 8.30 so with the new summertime it was good that it was still light for an hour more.
Last year the interest had not been that big and people were a little nervous, or better tense, to see if it was going to be a bit better this year.
And fortunately it was better. Last year the turnout was about 50 people, but this year the newspaper said about 250 people showed up, so that is a decent increase in numbers.
And that is a good thing because about the mistreatment of animals they can tell you a lot in Spain. Just think about the hunting dogs, galgos for example and the bullruns and if nothing is being done about it, it will probably go on for centuries more.
There were several animal welfare organizations who read manifestos, slogans were chanted and everybody participated, there was an altar with lighted candles in memory of all the innocent animals who died by mistreatment, and it was very emotional to see. 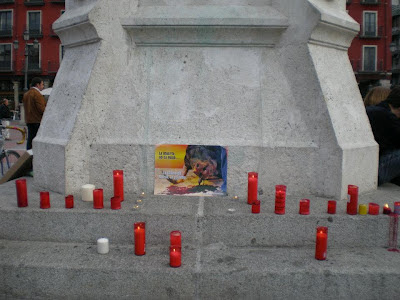 There were a lot of people with protest signs, including a very large one on Tordesillas, a village where because of a "party", a bull is being slaughtered alive by throwing lances into him, gruesome and too horrible for words that people seem to enjoy doing this. But even if we are living in the 21th century, this is still going on with the Spanish government consent. The Spanish government does little to nothing about cruelty to animals so it is often more dangerous to try and help the animals in need, than it is to torture and/or kill them, because then nobody knows about it and nobody will tell.
The press also paid attention and since these protests were throughout Spain, we might hope that we have raised the awareness and we have let those, who have no voice, be heard. But just let us hope that there will be someone listening because for them that is the most important.
But without doubt: till next year! 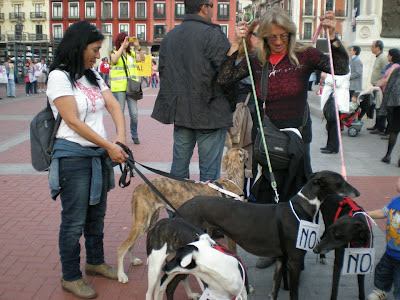 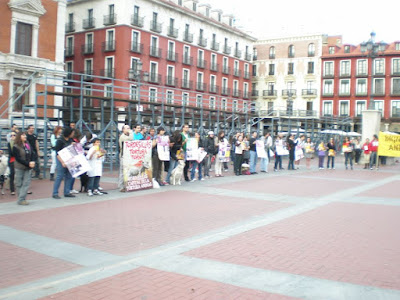 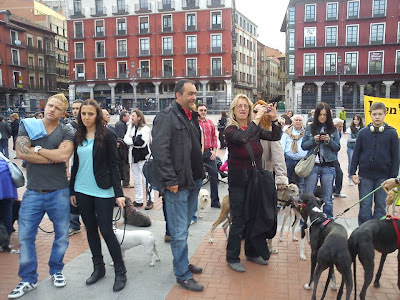 Our Galgo-Mix girl Elise didn´t have an easy start into life. She belonged to a matador and one fine day he decided, to dump her and another Galga at a perrera, where they were supposed to be put to sleep. So both of them desperately waited for a miracle…

And indeed it happened. Scooby discovered Elise and her companion in the perrera and we took them to our Residencia in Valladolid where both were allowed to first get over the shock. The Galgo girl is already reserved and looking forward to have a family of her own very soon. But Elise is still waiting. Meanwhile she has moved to the “Scooby-base” in Medina, where she has a big paddock and plenty of Galgo mates to play with. 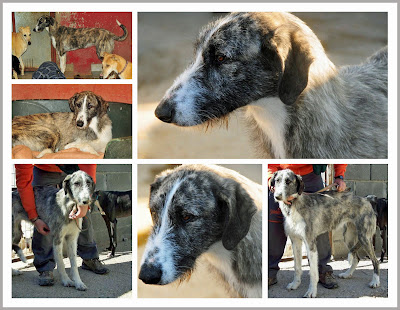 Our “little” beauty has a very special charisma and her look hits you right into the heart. She is a soft girl that likes humans but first doesn´t dare to run to you like many other dogs do. Elise conquers you the gentle way, lays her head in your hand, looks at you and you are melting away…We guess that, in a loving home, she will little by little mutate into a cuddle monster and wrap her entire family around the finger within a short while since obviously she is longing for affection.

Elise is eye-catching as soon as you enter her paddock because she is an extraordinary nice Galgo mix. She has the size and shape of a Galgo but everything on her is sturdier compared to a “normal” Galgo. Especially beautiful is her fur, wonderfully brindled and long-haired with white paws and a white tip of the tail. On top a pair of cute fluffy ears … and ready is the dream of a dog!!!

Yes, and now we are looking for a home for this dream of a dog, where she´ll never have to think about her past anymore but just will be a really happy dog. What about you?

Recently we received the mail and pictures below from Sombra´s, now called Sol, owners. He had to wait 2 long years at Scooby to finally find his forever home but now he is as happy as a dog can be. And also his owners;-)

although the winter must be a very hard time for you and all the animals there, we just wanted to cheer you up a bit by sending some pictures of big black beauty Sol (Sombra was his Scooby name) enjoying his first Dutch snow.

At first, he was watching the snow from his warm basket by the window and didn't know what to think of it, but once he was outside, he thought it was just like the sand at the beach, only a bit colder!
He absolutely loved and and spend some time running around with his 'brother" galgo Paco and then he found out that catching snowballs is even more fun then catching tennis balls, because you can eat them!
That was when I took these pictures; Sol is showing his beautiful snow beard!

Besides this, there's not so much I can tell about him, without repeating myself over and over again about what a lovely boy he is, quite obedient, very calm (yes, he really is! I know he was quite excited when he was staying at Scooby, but he's all at peace know, enjoying laying in his basket and going on long walks) and sooooo very affectionate!
When we look at him now, we think that he's truly happy to have found his own family and we...we're just so glad to have him here!
Hopefully there many, many more matches made in heaven are waiting for all the animals staying at Scooby!

Greetings from a white Holland

Lonneke and Gerard
Paco and Sol 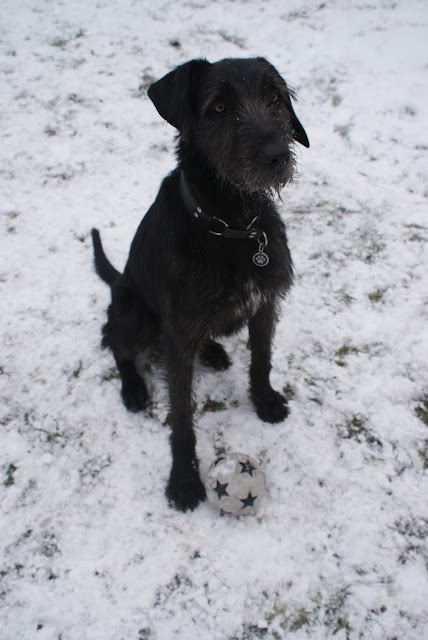 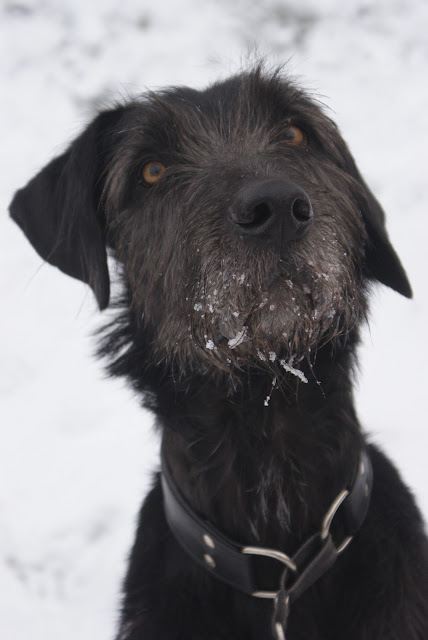 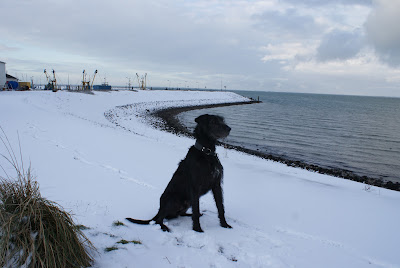 Adele´s “Rolling in the deep“ is history...

Nowadays it´s “Rolling in the carrots”
A load of carrots delivered to the Scooby fields on a sunny day in February.
The photos are NOT edited, all natural, and it simply was a festivity for the eyes, mainly in orange and blue, our website colors btw!
If you are looking for a way to volume up your hair, try it, that really works as you can see in the last photo;-)