We have a new little doggygirl at Scooby, she is black with a white coloured spot, medium sized and about four to five years of age.
Her beautiful face, her divine eyes, her look sad, very sad...
She came to us on a cold morning, soaked and wounded on one of her hind legs, they told us that they had seen a dog that could not get out of a channel in a neighbourhood not far from Scooby, we went over there and there she was, our friend, up to her belly in the water she was.
She was very scared, running from one side to another trying to get out, but she couldn’t escape because the only exit was near a farm where some big dogs were trying to bite her...
When we saw her she was very scared, we were trying to soothe her and in the end one of us managed to grasp her and between all climbed out and bring her to Scooby, dry her and clean her and it was then when we realized that she had a wound in one of her hind legs.
It looked like a bite, perhaps of one of the big dogs that were preventing her from escaping, the wound didn’t look good... it was infected and very swollen, probably due to the days that our friend had been in the channel and the poor state of the water.
We didn’t have much choice but to take her to the vet... the result: five stitches in her leg.
Back home she shivered, I think that was rather from the cold if not of fear, we looked at her asking ourselves what we were going to get her, we put food for her and managed to convince her to eat a good serving of meatballs.
Already more quiet and cuddled up next to Pinocchio which was the first of our dogs that came to sniff her,  whispering in her ear, "don't be afraid, here they will take care of you", she soon was peacefully asleep.
We decided to call her Cielo, ‘Heaven’. 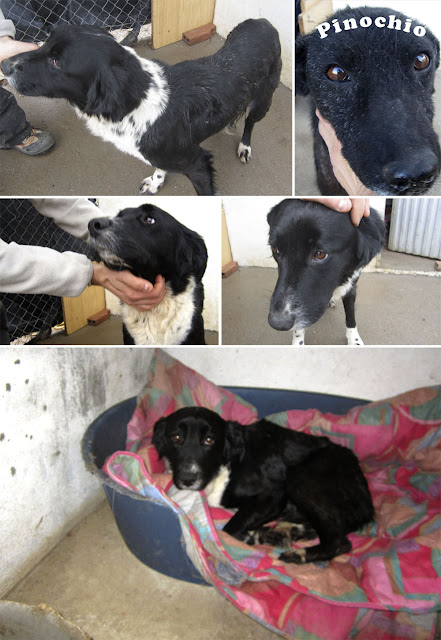